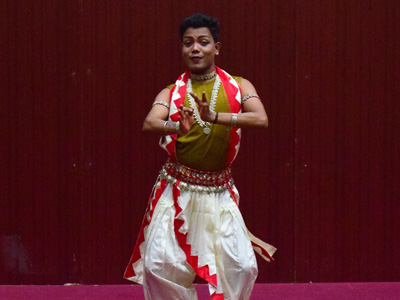 At the invitation of the School of Education, Pondicherry University, a special self-directed learning project for M.Ed. students was designed by the Renaissance-AuroBharati team led by Dr. Beloo Mehra. The project’s key objective was to facilitate reflection by student-teachers on the need to cultivate virtues as part of teachers’ self-development and inner growth. Story-telling, drama and performing arts were used as key media of expression in this project as these have been shown to facilitate deeper self-awareness and vital development in the learner.

This educational project was conceived to be part of our ongoing series, ‘Reawakening the Bharata Shakti: Toward an Indian Renaissance’ - a series of events and talks which explore deeply some of the themes that had been featured in our poster exhibition on Bharata Shakti in May 2022. 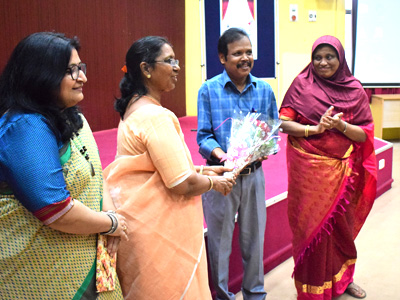 As part of Sri Aurobindo Society’s ongoing celebrations of 150th birth anniversary of Sri Aurobindo and 75th year of Indian Independence, it is important that we work closely with the younger generations who are future nation-builders and help awaken them to a need for deeper personal growth and transformation. This is important if they aspire to become effective instruments in nation-building work and gradually prepare themselves for a more fulfilling life. An education guided by a self-directed learning approach that values and encourages creativity and collaboration and facilitates building up in the learners’ confidence and leadership qualities is indeed the need of the day. The ‘Cultivating Virtues’ project began with selecting a few stories told by the Mother. These were shared with the Dean, School of Education who distributed these among the students. These stories emphasise the virtues of courage, gratitude and perseverance. The students divided themselves into three groups and decided which story they would like to take up for their project.

An online orientation for the project was organised on August 12, 2022 click here for the report.

The students wrote drama scripts based on these stories and planned their short skits, about 15 minutes each. They also planned and organised costumes, props, music and any other things they needed for their performance. 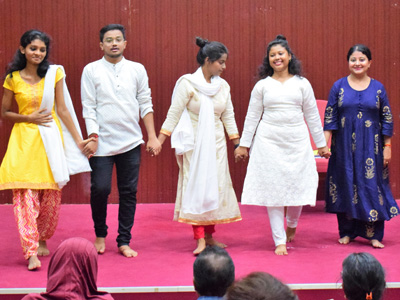 Following the August 12 orientation, Ms. Biswajita Mohapatra from AuroBharati kept in regular contact with one student representative and helped them figure out any concern they had about working on the project. Dr. Mehra also guided the students as and when needed especially regarding the scripts.

On the afternoon of August 30, 2022, a special event was organized by AuroBharati and School of Education. The event was hosted at the Seminar Hall, School of Management which has a nice stage for performances. Dean, faculty and students from School of Performing Arts were the special invitees for the event. 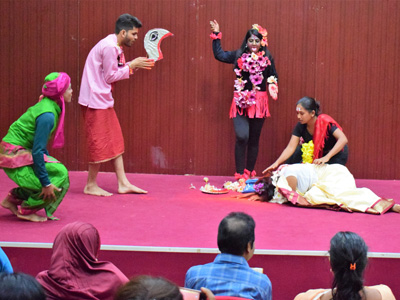 The event began with welcoming Dr. Chellamani, Dean, School of Education, welcoming Prof. Sridharan, Dean, School of Performing Arts. Dr. Chellamani also gave a brief welcome address. Dr. Mehra, Senior Academic Mentor, AuroBharati, Sri Aurobindo Society then gave a brief introduction of the project, explaining the thought process behind its self-guided learning design and use of theatrical and performing arts. She informed the audience that all the work has been done collaboratively by the students with very little input from the teachers except their full support, motivation and encouragement.

The three groups then presented their creative presentations in the form of dramatic performances based. The first group enacted the story titled ‘The Virtues’ which highlights the virtue of gratitude. The group kept their costumes simple but the paper crowns indicating different virtues made the whole presentation unique and charming. The second group enacted the story of Malti Madhava by Bhavabhuti which the Mother told as a story on the virtue of courage. The group had also done some research on who Bhavabhuti was and the background to the play Malti Madhava. This group had some elaborate costumes and flower adornments which made their presentation highly effective. The third group took up the story of Thiruvalluvar which the Mother told to emphasise the virtue of perseverance and faith in one’s destiny. This group’s work was most challenging given the nature of this story, but they managed to really convey the essence of the story through their performance as one scene merged into the next. Narration was used effectively for both this and the first presentation. 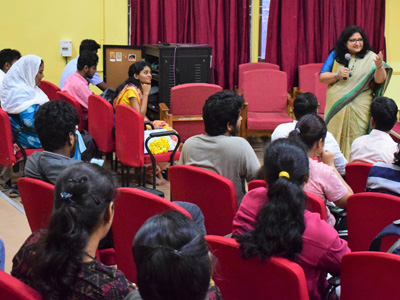 Following the student presentations, a reflection session was facilitated by Dr. Beloo Mehra asking students what they learned about themselves and their attitude to work and life through this self-directed learning project. Several students shared their experiences. A common theme in their reflections was how this work helped them appreciate one another’s special talents and the growth they experienced working as teams. Their collaborative experience really helped the group form close connections and appreciate the value of learning together. Some students also spoke about their discovery of some weak areas in their working style – such as time management, organisational ability etc. -- which they hope to work upon in future.

The event also included a beautiful Odissi dance performance by one student, Bidyut Mondal. He had selected a song that is a homage to Sri Aurobindo for his performance. The 6-to-7-minute performance was appreciated by all audience members. A small token of appreciation was presented by Dr. Beloo Mehra to Bidyut Mondal.

The event concluded with everyone present standing up for National Anthem.

A complete gallery of pictures from the event can be accessed here.