Contribution of Xufancheng for Intercultural Understanding 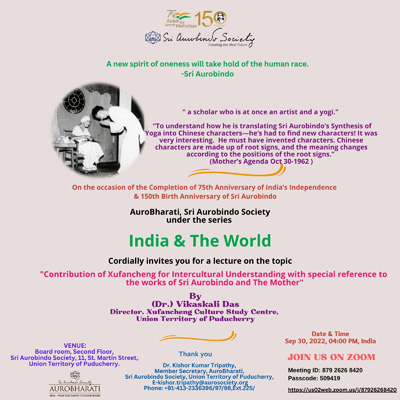 On the occasion of the completion of 75th Anniversary of India’s Independence, & 150th Birth Anniversary of Sri Aurobindo, AuroBharati, Sri Aurobindo Society Under the Series “India & the World” is organizing a Lecture on the topic “Contribution of Xufancheng for Intercultural Understanding with special reference to Sri Aurobindo and The Mother” by Dr. Vikashkali Das, Director, Xufancheng Culture Study center, Union Territory of Puducherry on 30th September, 2022 at 04.00 p.m.

Prof. XuFancheng was one of the great Scholars in the modern history of intercultural relations between India and Chinese-speaking nations. He is a well-known philosopher and translator in Eurasia. He was well versed in 9 languages which included Chinese (simplified, traditional), English, German, French, Sanskrit, Latin, and Greek. He was a versatile scholar, who had an in-depth study of Indian culture, Chinese and western culture.

He compared Sanskrit to the Changsha dialect from a phonological point to demonstrate the influence of Buddhism on native languages in China and cultural exchange and assimilation between China and India. XuFancheng was among the first Chinese scholars to translate the complete Great Upanishads and a few of the major works of Sri Aurobindo's in the Classical Chinese language. He introduced Sri Aurobindo and Mother Mirra's philosophy to Chinese-speaking nations.

He was able to recount Confucius’s thoughts represented by Lu wang’s philosophical school of the Ming dynasty, by basing on the philosophical thought of Sri Aurobindo. In 1957 at Pondicherry, he published Kalidasa’s original Sanskrit work Meghaduta and “The Bhagavad Gita” in the traditional Chinese language. In his works, Xu Fancheng adopted an original style of Lisao and Chinese poetry by composing his own poems on the basis of the original meaning.

For complete details of the lecture please click here.