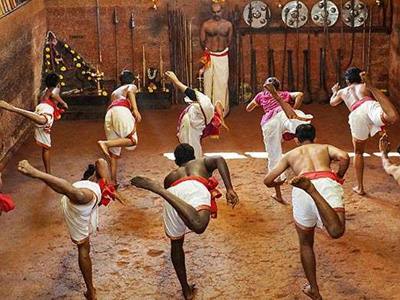 Make of us the hero warriors we aspire to become. May we fight successfully the great battle of the future that is to be born, against the past that seeks to endure, so that the new things may manifest and we may be ready to receive them.

Traditionally Kalaripayattu has four levels of competence which one acquires as part of the training process:

The initial training involves exercises that build strength, agility, flexibility and balance in the student. These exercises involve the vandanam (Salutation), Surya Namaskar (Salutation to the sun), Ashta Vadivu (the eight animal poses) and other movement exercises that strengthen the core muscles, enhance the flexibility of the body, and help develop greater balance.

At this stage, the student also learns chuvadu (steps) and Adavu (sequence of steps). These are sequences of movements which have a repetitive nature and help in building stamina, while also working on a core set of muscles for each type of exercise. These exercises, apart from developing specific sets of muscles, also enable students to build a rhythmic movement and increase their memory and mind-body coordination.

When the student has progressed sufficiently under the watchful guidance of the teacher, they become eligible to learn to use the wooden weapons. These include the long stick (Pantheeran – to indicate 12 spans), the short staff (mucchan), Otta (the curved stick).

Each of these weapons is accompanied by a sequence of steps (vaithari). The students learn these sequences of steps and their variations, and in time their movement becomes fluent, and the stick becomes an extension of their arms. These movements apart from teaching the student to defend themselves also builds on mind-body coordination, a higher degree of awareness, and an ability to bring their focus to a single point.

The metal weapons form the next set of lessons for the student and consist of weapons like the dagger (Kadaram), sword and shield (Vaal and Parichaya), spear (kuntham) and the flexible sword (Urmi). As with wooden weapons, these weapons are also learned with a specific sequence of movements. As the students become fluent with the weapons, they also learn the different variations and combinations in movements. Wielding metal weapons requires a high level of focus and concentration to avoid physical injury. The student subconsciously learns to become highly focused.

This is the final stage of learning where the student learns to defend himself without any weapons. In this section, the student learns to defend himself from any attacker carrying weapons with his bare hands. The sequence of steps involves learning to evade an attack by jumping, feinting, tumbles, blocking with arms and legs, disarming the opponent using holds and locks. This training calls for a high degree of agility and flexibility, and also awareness of the surroundings. A student at this level needs to be in a state where the body is all eyes, indicating the level of awareness of himself and the environment.

The training will be conducted from Monday to Friday in two batches.