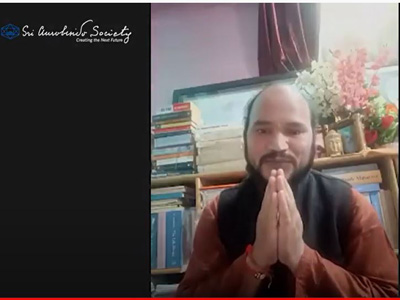 For the sixth lecture in the series, we invited Dr. Charan Singh Kedarkhandi to share some thought on a very special and delightfully inspiring topic – Veera Rasa in Sri Aurobindo’s Savitri. 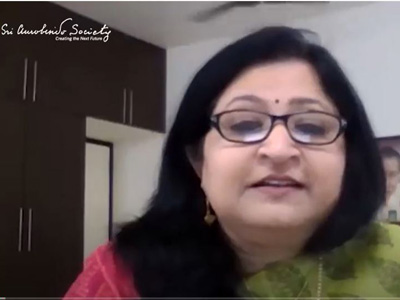 After a moment of silence invoking the Mother’s presence, the event opened with brief introductory remarks by Dr. Beloo Mehra and introduction of the speaker by Ms. Biswajita Mohapatra of AuroBharati. In her comments, Dr. Mehra mentioned that the topic fit in perfectly with the March issue of Renaissance, Aurobharati’s monthly e-journal, which is dedicated to the theme Courage. She also reminded the audience members that both Sri Aurobindo and the Mother emphasised courage as an essential quality to cultivate for walking on the path of Integral Yoga; the Mother also said emphatically – our yoga is not for the cowards.

In many of Sri Aurobindo’s poems we find great portrayals of Courage – courage physical, moral, emotional, spiritual. Courage – Daivic and even Asuric. From Bhavani Bharati to Baji Prabhu, from Hymn to Durga to Vidula, from Invitation to Ilion, from The Fear of Death to The Rakshasas, there are so many. Essentially, Sri Aurobindo’s and Mother’s entire Yoga, God’s Labour, was a poetic ode to the essence of Courage, the Veera-rasa. Theirs was the Courage Divine, and if Savitri is a record of Their Yoga, naturally as their aspiring children we were delighted to savour some of that rasa in Savitri. 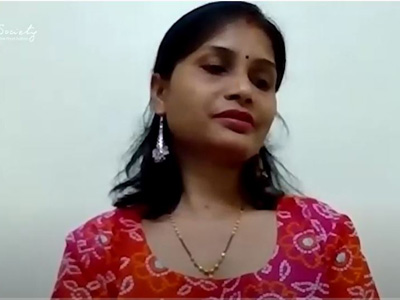 Dr. Charan Singh began by invoking the prayer the Mother had given for Ashram students in which she reminds us to aspire to become hero-warriors so that we can be ready for the great battle of the future and have the strength to fight against the resistance of the past. Adding that Sri Aurobindo’s and Mother’s yoga is yoga for future humanity, Dr. Singh reminded us that to walk on the path of Integral Yoga is an adventure of consciousness in which we have to walk boldly and courageously.

Briefly referring to Sri Aurobindo’s poem ‘Invitation’ where he pointed out how the seer-poet invokes the deeper sense of courage and boldness, qualities which are essential for the path on which he is inviting his followers.

Dr. Charan Singh Kedarkhandi then walked the audience through a few selected passages from Savitri. Pointing out specific phrases and descriptions, he highlighted how the rishi-poet Sri Aurobindo describes the deeper truth of who Savitri is, the embodied Shakti who brings the power of might, courage and force of the Divine Mother to transform earth and earthly life.

Highlighting the poet's description of Savitri as a Fire and Flame, the speaker gave several examples from different cantos beginning from the birth of Savitri to the point where she meets the lord of death, Yama. As he patiently read selected lines from Savitri and gave delightful explanations, the audience members were able to appreciate remarkable and delightfully inspiring descriptions of Savitri's indomitable spiritual courage and light.

Through his engaging explanations and using highly relatable examples, Dr. Charan Singh could bring to life some of the events and situations described in the poem. This allowed the themes of courage and power to emerge almost organically and yet so forcefully during the deliberations.

The audience members found the session highly engaging, and also ‘forceful’ and ‘delightful’. It was felt that the session could have continued with more reading and explanations from Savitri. Here is some more feedback:

Recording of the lecture can be accessed here.

Dr. Charan Singh Kedarkhandi is a poet, thinker and an avid seeker of Sri Aurobindo's path. In 2013, he completed his doctoral research on Sri Aurobindo's Savitri. He regularly contributes articles on different aspects of the vision and work of Sri Aurobindo and the Mother in various journals, including Renaissance, the e-journal of AuroBharati. In 2019, a collection of his 95 poems in Hindi – covering a wide range of his insights on Life, Nature and Spiritual Quest -- was published under the title: मूक वेदना का कालजयी कथानक

Presently Dr. Charan Singh works as Assistant Professor of English at the Govt. P.G. College in Joshimath, Uttarakhand. He was instrumental in establishing the Sri Aurobindo Study Centre in Joshimath. He has been closely associated with the works of Sri Aurobindo Society in Uttar Pradesh and Uttarakhand, also serving as State Secretary in the past.