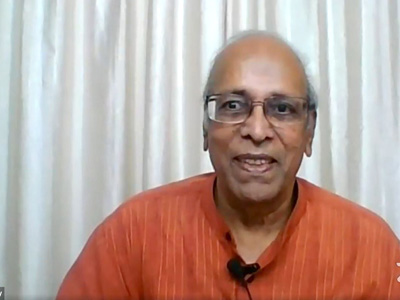 For the third lecture in the series, Dr. Ananda Reddy presented deep deliberations on a topic of great significance for India and the world. His thought-provoking talk on the topic “India’s Mission: A Spiritual Fusion of Religions” addressed several key questions: What does a spiritual fusion mean? Is it even possible? And why is it India’s mission to work toward this? Is India actually marching toward that? What are the challenges? 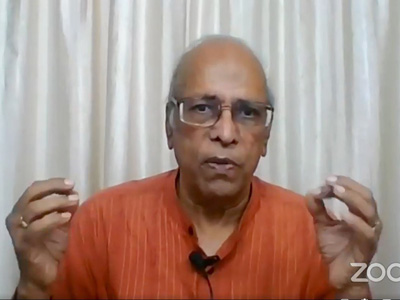 Dr. Reddy took some time describing the central truths of Sanatana Dharma which is the very foundation and also the superstructure of the essential religio-spiritual culture of India. This is what has shaped the deeper Indian view of religion and its utility in the evolutionary nature of human consciousness.

Dr. Reddy also emphasised that accepting the evolutionary march of human consciousness, Indian spiritual culture recognises the need for a multiplicity of paths to the Divine, and a gradual progression from outward religious life to a more inward-oriented life which seeks the truth of spiritual experience and realisation.

He also highlighted the deeply assimilative nature of Indian culture, and quoting from Sri Aurobindo cautioned that such an assimilation can never be at the cost of acceptance of India’s central truths. 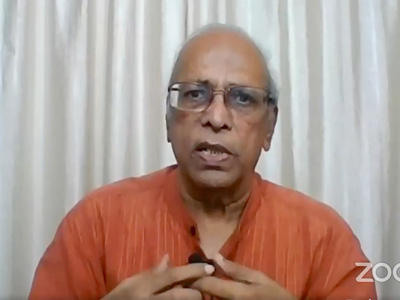 Dr. Reddy reminded that no amount of superficial inter-faith dialogue or any surficial social-political adjustments will ever bring about any meaningful synthesis or harmony. Drawing on keen insights from several works of Sri Aurobindo, including some of his letters written to a Muslim disciple who lived in the Ashram, Dr. Reddy explained what is required for a true synthesis and what are the challenges.

A true spiritual synthesis is only possible in the realm of spiritual experience, Dr. Reddy emphasised. As long as our consciousness remained confined to the outward religious mode of life – no matter how saintly, it is not possible to fully let go of rigidity of mind and practice. This is why a sincere inner aspiration for realising the spiritual truth behind and beyond all religions is critical.

Dr. Reddy also spoke briefly about the place of religion in the new supramental creation. He reminded the audience quoting from the following letter of Sri Aurobindo: 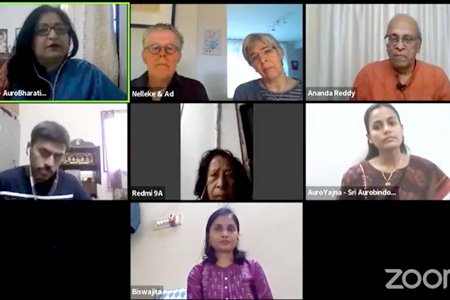 “…whatever is necessary to keep from the past as materials for the future, will of itself and automatically be taken into the new creation when things are ready and the full Light and Power at work. It is not necessary for anybody to represent or stand for Islamic ideals or for Hindu or Christian ideals; if anybody here thinks he must stand for one or other of these things, he is making a mistake and is likely to create unnecessary narrowness, clash and opposition.

“There is no opposition or clash between them in spiritual experience; it is only the external human mind that mistakenly puts them against each other. What we are here to make is a new creation in which there is a larger reconciling Truth than anything that went before in the past; but what will reconcile and create anew is the Power, the Light, the Knowledge that comes from above. The important thing therefore is to prepare yourself for that Power, Light and Knowledge; it is only when that descends that all will be done rightly. Nothing can be done rightly by the individual working without the Light and the Knowledge.” (CWSA, Vol. 35, pp. 696-697)

Dr. Reddy’s careful deliberation on this topic became more significant in the light of the fact that as all over India, events are going on to celebrate the 150th birth anniversary of Sri Aurobindo and 75th year of India’s political independence, in some sections there is a tendency to speak of Sri Aurobindo as a Hindu spiritual guru or limit his vision to a Hindu worldview. 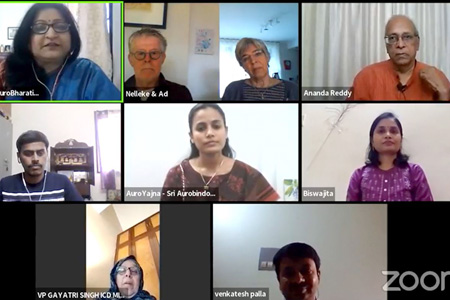 In his talk, Dr. Reddy remarked that such an idea must be forcefully challenged with a true and correct representation of the work and vison of Sri Aurobindo and the Mother. In that regard, he reminded the audience of the following passages from Sri Aurobindo’s letters, which present the right approach for how the future supramental creation will inherently be integrative of all that is fundamentally true, with Sri Aurobindo Ashram and Auroville as pioneering laboratory and experiment, respectively, where a new consciousness is being prepared in human nature, bit by bit.

“What is being done here is the preparation of a Truth which includes all other Truth but is limited to no single religion or creed, and this preparation has to be done apart and in silence until things are ready.”(Sri Aurobindo, CWSA, Vol. 35, pp. 699-700)

The intricate nuance and depth with which Dr. Reddy deliberated on this topic, one which is highly relevant for our times, made the session highly inspiring and educational. About 35 participants had joined this online event organised on Zoom. The lecture was also live-streamed on Sri Aurobindo Society’s Facebook page, where so far it has reached out to more than 700 people. (Accessible here).

The session concluded with some questions from the audience members, and Dr. Reddy’s thorough replies to them, in the light of Sri Aurobindo’s and the Mother’s vision for the future of humanity.