The Spiritual Ranges of the Mind 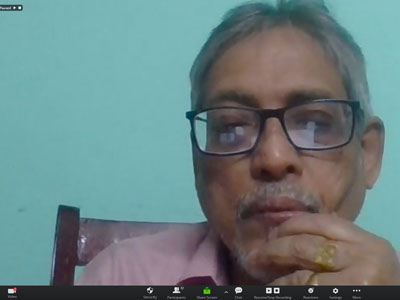 The programme was organised by NAMAH, the Journal of Integral Health, from 6th - 11th September 2021 with an aspiration to make the different ranges of mind a vivid and workable reality for the participants. Rooted in Dr. Soumitra Basu’s consciousness-based and practical approach towards human psychology, this programme became a space for exploring vast planes of consciousness and enabled participants from all walks of life to get a glimpse of the different ranges of mind and become aware of the ladder of consciousness. Dr. Soumitra Basu began the first session on ‘Overview of the Consciousness Approach’ by bringing the participants’ attention to the shift in the paradigm of thinking that has taken place over the last 100 years. A new type of non-linear thinking has emerged that holds the potential to comprehend the most original and comprehensive contributions to the world of thought – Supra-cognitive planes of Consciousness given by Sri Aurobindo. He further spoke about the ancient ideas about Brahman, heaven and hell, liberation, and how Sri Aurobindo revealed the greatest values of the Brahman: Sat Chit Ananda (Existence Consciousness Bliss) and also modified it as Sat Chit-Shakti Ananda (Existence Consciousness-Force Bliss) which is a kind of programming to manifest into real ideas, ideas that can be turned into a reality which he described as the Supermind. He explained consciousness from the lens of personality and impersonality, sharing two simultaneous perspectives; horizontal and vertical systems of being as a means to access and express consciousness and the need to develop the spiritual ranges of mind for the transformation of ego-based individuality to a True individuality.

The second session was on ‘The Deeper Ranges of Cognition’ and the discussion started with highlighting the movement of our outer being around the ego and inner being around the soul, with a clear distinction between three equally important and valid poises of the Spirit –

Individual, Universal and Transcendent. At the surface level, human beings have attempted to grapple with questions of uncertainties and dissatisfaction with a sense of incompleteness in knowledge as in surface cognition, The ego has a role of limiting us from Transcendence. Dr. Soumitra Basu further spoke about the fundamental difference between animal (instinct) and human (intuition) and different tools like sensory perception, reason available for surface cognition, and the importance of a witness attitude and knowledge by Identity in the process of developing subliminal cognition through Knowledge by Inspiration, Intuition, Revelation.

In the third session on ‘The Higher Mind and Illumined Mind’, Dr. Soumitra Basu spoke about different thinking styles and thinking with contradictory ideas as the preparation for the Higher Mind. He further shared Sri Aurobindo’s approach towards the evolution of cognition as building the ladder of different spiritual mind ranges, instead of surpassing cognition to access the new field of consciousness. Qualities and attributes of the Higher Mind as a mind of mass ideation with a constructive dynamic force and a cosmic character were discussed along with bringing attention to the Illumined Mind as a revelatory ideograph and a mind of Higher Light, beyond logic and rationality. The session ended with highlighting the importance of silencing the mind as the first necessity to access these higher ranges and the need for Knowledge and Will to come together for the higher manifestation of consciousness. 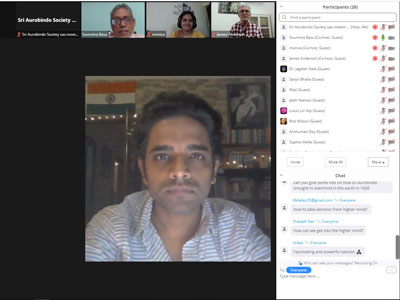 The fourth session on ‘Intuition in the Spiritual Perspective’ took the participants deeper into the exploration of what true, spiritual, higher Intuition is, along with its role in the evolution and how earlier it was available to us spontaneously and now we have to develop it consciously. Sri Aurobindo explained Intuition as a self-existing Truth received from higher planes. Dr. Soumitra Basu further elaborated on the research on Intuition from the lens of psychology and explored the relationship between Incubation and Intuition, stating incubation as a part of Intuition through illustrating certain examples from the past. The session came to a close with a discussion on consciously cultivating Intuition through silencing the mind, developing personal will, rising to a cognitive source beyond the mind, and with the way of Bhakti wherein the psychic intuition brings one closer to Truth.

During the fifth session on ‘The Overmind or Global Cognition’, Dr. Soumitra Basu spoke about the Overmind being the field of multiplicity wherein the independent Idea-Forces derived from pre-programmed creative essence (in The Supermind) are aware of their implicit underlying unity and each potential Idea-Force admits all other potentials. At the level of Global Cognition (Superconscient Cosmic Mind), it is concerned with the Essence behind the Idea-Forces and is the basis of cosmic consciousness, representing the upper ranges of cosmic consciousness. Dr. Soumitra Basu further explained how cosmic consciousness has a part that exists in the matrix of cosmic ignorance (ordinary cosmic mind) and can neither transform the Inconscience nor dynamise the transcendence. At its origin, lies unity, total consciousness, and total knowledge and therefore the individual cognitive field must connect with its origin and not at the poise of ignorance. The session ended with discussing the Cosmic Vision in The Bhagavad Gita as an experience inspired by the Overmind and stating Overmind as the father of all things that are manifested.

The programme ended with the sixth session on ‘The Supermind or Integral Cognition’, where everything is looked at together, simultaneously. It is the highest culmination of the trajectory of our cognitive abilities. Dr. Soumitra Basu went on to speak about the two poises of Supermind – the primary (comprehending poise), where Knowledge of Oneness exists as all manifestation is present as an essence (Impersonal God) and the secondary (projecting poise), where knowledge of multiplicity is experienced (Personal God). He also touched upon the role of Avatars in the evolutionary expansion of consciousness and the part Sri Aurobindo and The Mother have played as dual Avatars in the activation of the Supermind to ensure continuity of creation.

This continuous six-day exploration of different spiritual ranges of mind was well received by the participants of about 50 in number. Simple and relatable examples, shared by Dr. Soumitra Basu, helped them understand the complex concepts more easily and allowed them to attempt building their ladder and access the vast ranges of consciousness. The programme ended with a hope of new creation and a powerful message for the participants to continue their explorations after the programme as well – “The Divine Law has got us far, now at our stage, we have the option to make a conscious choice, a capacity to collaborate, utilise our potentialities – evolve further on or destroy the world!”

“Thank you to the entire team for all the efforts taken. Gratitude to Soumitra, sir for giving us a deeper insight.”

“Thank you very much Soumitra da for this very powerful series. Reflection and revisiting is a must.”

“The sessions last week were fantastic and there is so much to process. It is always good to re-watch and read the summaries again and again until full clarity enters.”

“And I must say by way of feedback that NAMAH is a blessing to all of us. Lots of gratitude to James and the team for holding such valuable spaces through the last year and this one!”

“Thank you Dr. Basu for your enlightening and beautiful sharing of your wealth of knowledge…”

Beautiful sessions, many learnings, it’ll take me a while to take it in. Much gratitude.”

“Thank you Dr. Basu for the wonderful workshop. Will look forward to the next series.”

“Thank you NAMAH. Thank you, James. Thank you, Dr. Basu, it would be great to continue the journey with you.”

What did you enjoy most about the workshop?

“The exploration of the working and expansion and possibilities at a spiritual level at each plane.”

“The Energy and Wisdom pouring from Dr. Basu and his amazing knowledge of Sri Aurobindo and La Mère's teachings, How he has made it his and shared it generously.”