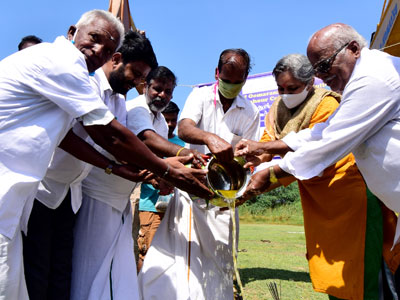 A new link-tank to the Mullodai Drainage channel was inaugurated by Sri. R.Senthilkumar, Hon'ble MLA of  Bahour today (20th September 2021) at 10.30 am by performing the puja at the Oomarankadu Tank in the presence of the Project Coordinator, Ms.Shalini Aravindan, Mullodai Channel association functionaries Mr. Purushothaman and Mr. Kamalakannan, Bangaru Channel association President Mr.Chandrasekhar along with local farmers and other staff from Sri Aurobindo Society. 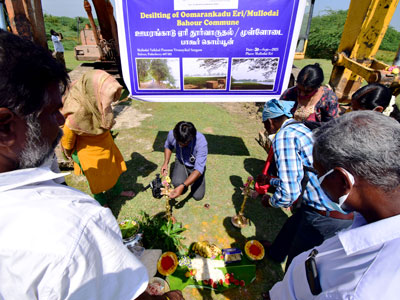 The new tank once completed will have a water spread area of 17.8 acres with a total volume of 1.44 lakh KL (cub.m) and will have tremendous rain-water harvesting and would also prevent wastage of precious rainwater being wasted into the Bay of Bengal during the rainy season. Since this is also the creation of a new waterbody, this has historical implications.  Though Puducherry once had 87 irrigation tanks, currently only 84 of them remain as three of them have been permanently lost forever.