Indian History in Indian Education: Beyond Ideologies and Politics 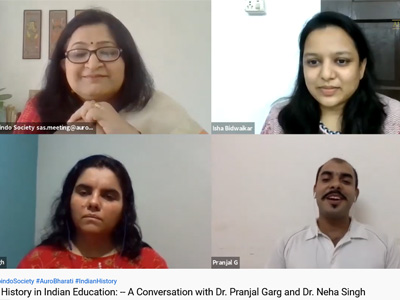 “The past must be a spring-board towards the future, not a chain preventing us from advancing…all depends on the attitude towards the past.”

On August 15, 2021, AuroBharati invited Dr. Pranjal Garg and Dr. Neha Singh for an online conversation on a topic highly relevant for our present and future march as a nation– ‘Indian History in Indian Education’.

Given that a people's or nation's sense of their identity is closely connected with how they know or understand their history, it is natural that ideological differences would be there in how a people or a nation understand their history. But in case of a hugely diverse country such as India, some of these differences have become so considerable over time that at times it seems the discipline of Indian history has become a battlefield of politically inclined ideologues rather than a pursuit for seeking the truth about the past. 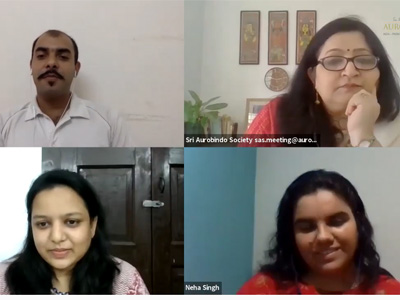 In the light of this, and with a hope to take our conversation beyond the ideological divide and instead bring in a more holistic perspective to how we can understand our history as a nation and civilisation, we started off our session with Dr. Neha Singh giving us a brief overview of some of the key debates and challenges that mark the way Indian history is written and generally taught at present. Dr. Pranjal Garg emphasised that part of the reason we see these challenges is because we often fail to see a sense of gradual evolutionary march behind the outer events of the history.

Coming from slightly different yet converging perspectives, both the professors highlighted that history educators must help the students see the connection between the past and the present of a society and civilisation, and also point out how these connections are shaping the future that is yet to come. With regard to the connection between a people’s past and their sense of collective identity, particularly when it comes to debates around who are the native inhabitants of a specific land or a nation and who came from outside and with what motivations, it was pointed out that eventually the focus must shift to gradually arriving at an internal agreement or a sense of deeper co-existence which comes when people work toward transcending the outer limited identities formed by the circumstance of outer history.

The conversation also brought to light the impact of various agendas and interpretive categories – West-centric Indology, Marxist, Critical Theory, etc. – employed by different historians, which often tend to highlight only partial facts and emphasise certain perspectives at the cost of suppressing others. It was suggested that perhaps a more holistic approach to history writing and teaching has to adopted which is not merely an intermingling of these diverse interpretive lenses, but is rather an approach to study a civilisation’s past by integrating the inner, subjective march of the humanity (whether it be in the realms of metaphysics, spirituality, psychology, etc.) with the outer course of events such as movements of people, rise and fall of dynasties, invasions, colonisation, etc. 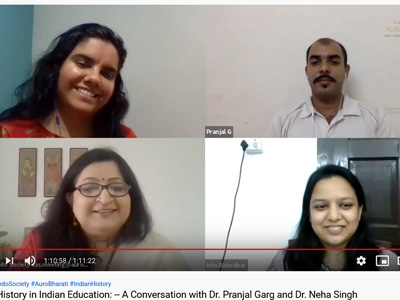 In today’s climate of information overload, it is very important that history educators take a more careful approach and facilitate a more open exchange of ideas and viewpoints in their classroom and encourage a healthy debate. This, as was emphasised by both Dr. Pranjal and Dr. Neha, is an important goal for any meaningful educational experience – to help open the mind to new knowledge and new ways of looking at the world.

Our conversation also touched upon the history vs. mythology debate. Given the deeply religio-spiritual nature of Indian culture, both the professors highlighted that this divide is an artificial one, and a thorough study of history, particularly in India, can’t be separated from a study of what Western historians refer to as religious mythological texts, which are in fact important sources to learn about the inner motivations which make a people or a community value some particular aspect or goals of life and organise their outer lives around those goals or and pursuits. While Dr. Neha Singh spoke about the different interpretive perspectives informing different historians’ approach to study a people’s myths, Dr. Garg highlighted that it is important to dig deeper into the texts and try to identify what might have led the composer at a particular point in the historical march of the civilisation to highlight certain truths about life, world, reality and existence.

Several other important points discussed during the session included: the role of storytelling particularly when teaching history to younger children, he value and authenticity of sources when studying the past, recognising that writing and studying history is a dedicated pursuit which requires keeping an open mind to new findings and also uncomfortable truths that are uncovered over time.

Dr. Pranjal Garg is an Assistant Professor in the Department of History at Central University of Tamil Nadu, Thiruvarur. He is an alum of Sri Aurobindo International Centre of Education, Pondicherry. After completing his Masters in Ancient Indian History, Culture and Archaeology, he went on to do his Doctoral thesis on the Harappan studies and the contemporary Chalcolithic cultures of western India. He has taught at post-graduate level as an Assistant Professor at C B L University, Bhiwani and at Maharshi Dayanand University, Rohtak at the department of History and Archaeology. He is deeply interested in interweaving the different aspects of History with Indian culture and the lesser-known indigenous classical knowledge systems to bring forward more meaningful and relevant perspectives from a holistic approach into the mainstream Historical studies. His thrust of research is in ancient Indian culture, classical archaeology and archaeological sciences, Vedic and Indian philosophy and several different aspects of ancient Indian History.