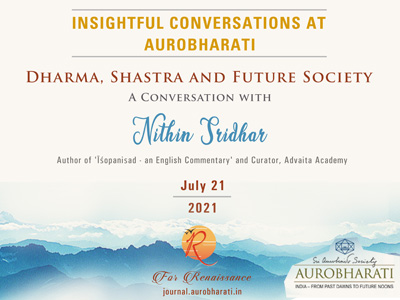 On July 21, 2021, AuroBharati team invited Nithin Sridhar, author of several books on Sanatana Dharma and a commentator on various social-cultural-political issues of our times. ‘Īśopaniṣad: An English Commentary’ is his most recent book.

Referring to the Upanishads as at once scripture, philosophy and seer-poetry, Sri Aurobindo remarked that Upanishads are the supreme work of the Indian mind, the highest self-expression of its genius, its sublimest poetry, its greatest creation of the thought and word. And Isha Upanishad, he added, is a masterly work that in a deeper sense lays the foundations of a Divine Life here upon earth. Spending time with Sri Aurobindo’s commentaries on Isha Upanishad is a must for any student of Vedanta, primarily because these are intuitive truths of a Rishi explaining the truth-visions of another Rishi, which also reveal for us the deepest significance of the Upanishad’s truths for an integral approach to life and sadhana. 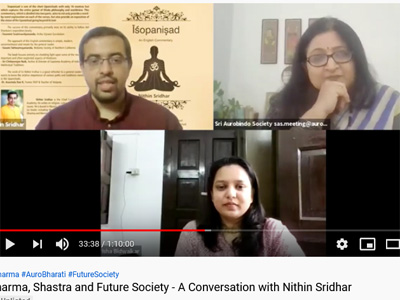 In this light, our wide-ranging conversation with a young Indian seeker writing a commentary on Isha Upanishad became even more fascinating and brought in a different perspective. Nithin Sridhar briefly shared his writing journey and how he grew interested in writing about civilisational and cultural challenges of our times, and what drew him to study Upanishads, and particularly Īśopaniṣad. He spoke about the years of study and patient rewriting of drafts that went into his present book. Staying closer to the Advaita Vedanta perspective in his commentary, Nithin Sridhar has done a commendable job in presenting the profound truths of the Upanishad in a language and style that would appeal to a large number of readers.

Nithin also shared with us a few specific verses from Īśopaniṣad which resonated powerfully with his inmost being and profoundly impacted his understanding of life and how to live a dharmic life. As a practicing Hindu, who seems to integrate in his daily life the path of karmānuṣṭhāna, or ritualistic approach to practicing dharma, with a seeking for higher knowledge, and one who has spent considerable time studying and contemplating on the rightful place of study of śāstra or scriptures in a dharmic life, his response to our question about the significance of studying śāstra or scriptures in today’s age, and what one should be seeking through the study of scriptures added an interesting perspective. Nithin Sridhar also shared some of his observations on the role and responsibility of families and communities in helping children connect with their cultural roots, and facilitating in them a genuine deeper quest or seeking for higher values.

Our conversation also included Nithin sharing with us about what led him to write his highly successful book – ‘Menstruation Across Cultures: A Historical Perspective.’ This book was summarised in a previous issue of Renaissance, the monthly e-journal of AuroBharati. It was fascinating to hear about some of the reactions and responses Nithin received from young men and women, and also some experts from medical community.

About the Guest Speaker:

Based in Mysuru, Karnataka, Nithin Sridhar has a degree in Civil Engineering and having worked in the construction field, he now passionately writes about various issues from development, politics, and social issues, to religion, spirituality, and ecology. He is currently the Chief Curator of Advaita Academy dedicated to the dissemination of Advaita Vedanta. He is also a Consulting Editor to Indic Today Magazine, a portal on Indian history and culture. He was previously Editor of IndiaFacts. His first book “Musings on Hinduism” provided an overview of various aspects of Hindu philosophy and society. His book ‘Samanya Dharma’ enunciates general tenets of ethics as available in Hindu texts. However, his most widely read book is ‘Menstruation Across Cultures: A Historical Perspective’ which examines menstruation notions and practices prevalent in different cultures & religions from across the world. His latest book is an English Commentary on ‘Isopanishad’.