Yoga and Cultural Misappropriation: A Conversation at AuroBharati 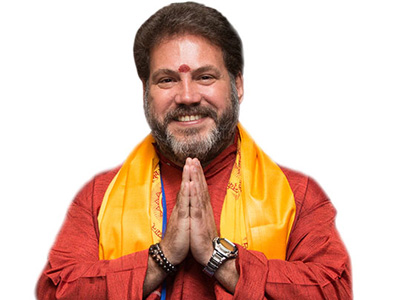 Recording of the full session is available here.

To mark the International Yoga Day, June 21, AuroBharati team invited Yogacharya Dr. Ananda Balayogi Bhavanani, Director of the Centre for Yoga Therapy Education and Research (CYTER), and Professor of Yoga Therapy at Sri Balaji Vidyapeeth University, Puducherry, for an interview on a topic highly significant for our times – Yoga and Cultural Misappropriation.

Yogacharya Dr. Bhavanani shared his insights on what is cultural misappropriation of yoga and what factors lead to such a phenomenon. Based on his years of experience of having worked closely with a very large number of students from various countries at his Yoga ashram, Yogacharya Dr. Bhavanani observed that many sincere students who come from abroad to do a rigorous and serious study of yoga do slowly recognise and understand that yoga is indeed sadhana and that it should or could not be reduced to merely a set of exercises to feel good or look good or become happy. They also begin to appreciate the true spirit and significance of various cultural practices and forms to which they are introduced during their stay at CYTER. 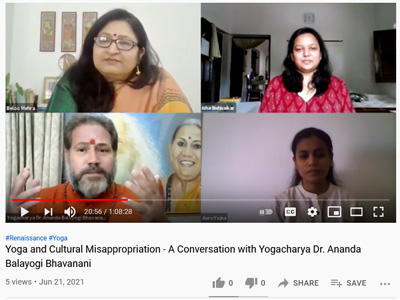 But those for whom yoga is nothing more than a mere body-based practice, they are the ones who end up using Indian culture as a package to sell their yoga business, all of which further leads to cultural misappropriation of yoga.

The conversation also highlighted that this issue of cultural misappropriation should not be seen through the divisive lens of Us vs. Them or Indian vs. Western. Rather, our effort must be on clearly articulating the eternal and universal spirit of sanatana dharma as the origin and context of yoga. It was also pointed out that the cultural uprootedness of Indians in general, combined with a deep-seated colonisation of Indian mind, is also responsible for why Indians in general haven’t been able to clearly articulate the deeper cultural context which gave rise to yoga. Yogacharya reminded that while there is sometimes a tendency to misuse or misapply this charge of cultural misappropration – as is the case in most social awareness movements, – at the same time it is important to meaningfully and authentically address this issue of cultural misappropriation of yoga in a way which is grounded in the essential spirit of dharmic culture of India.

About the Guest Speaker: 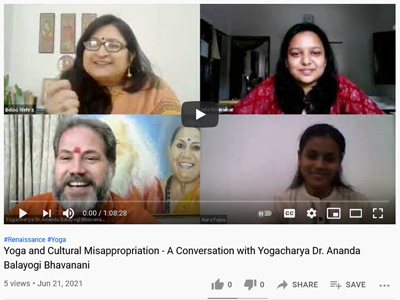 Yogacharya Dr. Bhavanani is the recipient of the coveted D.Sc. in Yoga from SVYASA Yoga University. He is the son and successor of the internationally acclaimed Yoga team of Yogamaharishi Dr. Swami Gitananda Giri Guru Maharaj and Yogacharini Kalaimamani Ammaji, Smt Meenakshi Devi Bhavanani, and is the Chairman of the International Centre for Yoga Education and Research at Ananda Ashram and Yoganjali Natyalayam, the premier institute of Yoga and Carnatic Music and Bharatanatyam in Pondicherry. He is a Gold Medallist in Medical Studies (MBBS) with postgraduate diplomas in both Family Health (PGDFH) as well as Yoga. A Fellow of the Indian Academy of Yoga, he has authored 19 DVDs and 25 books and 31 compilations on Yoga as well as published more than two hundred and fifty papers, compilations and abstracts on Yoga and Yoga research in National and International Journals.

Dr. Bhavanani is currently member of numerous expert committees of the Ministry of AYUSH including its National Board for Promotion of Yoga and Naturopathy, Scientific Advisory Committee, Technical Committee of the Yoga Certification Board, Expert Committees for Celebration of International Yoga Day and the Yoga & Diabetes program. He is Consultant Resource Person for the WHO Collaborative Centre in Traditional Medicine (Yoga) at MDNIY, New Delhi. He is also Executive Committee member and Director of Publications of the Indian Yoga Association.