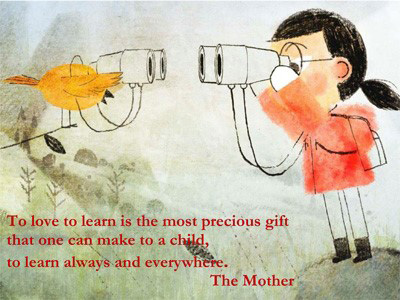 SAFIER, the educational wing of Sri Aurobindo Society, Puducherry, offered interactive online sessions titled ‘Rainbow Dreams 2020’, for children in the age group of 9–12 years (and who had attended our last year’s Rainbow Dreams programme) for two months starting from June 2020. A Special Parent interaction session was simultaneously organised. The workshop was coordinated by the team of Sri Aurobindo Foundation for Integral Education and Research (SAFIER).

These sessions were organised in the light of Sri Aurobindo’s and Mother’s vision to always walk ahead on the path of progress despite difficulties. We have aspired since many years to give an integral platform to the children between the age of 9-12 yrs. The current aspiration is to carry it forward on the virtual medium which is the need of the hour, where the children experience inner joy by exploring their emotions, thoughts and body awareness through different mediums like Painting, Crafts, Storytelling, Chanting and songs, and Yoga asanas.  There were six enthusiastic participants who had enrolled for the sessions.

The children started the sessions with an invocation of peace by reciting Shanti Mantras lead by Priti, which helped them become peaceful with respect to their body, in their thoughts and emotions and towards each other too. 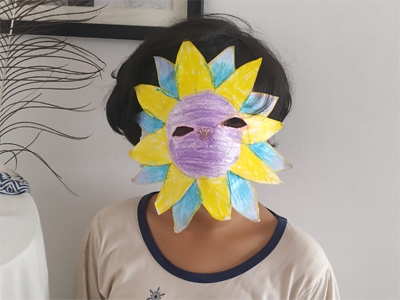 Children have a spontaneous instinct for adventure to discover the new and unknown. Sushanto da tapped into this natural tendency of children to develop their faculty of artistic imagination and give them a visual experience. The group was led through a thrilling adventure trail in a dense and deep jungle where at each moment unfolds strange events often revealing the hidden beauty of nature. These imaginary visual experiences were given a concrete shape by painting and various activities carried out by the children simultaneously. These sessions inspired the children to stimulate their quick imagination power combined with the medium of giving expression to their creative ideas.

Tales and Fables and Craft Waft 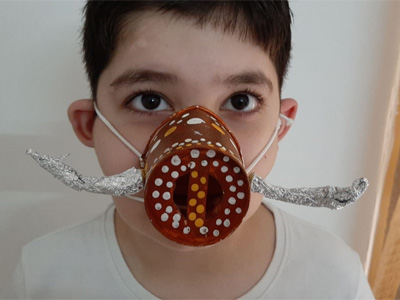 The world of legends and fables attract children and adults alike, in a fantasy world where they can get lost and rediscover themselves through hidden meanings. Priti and Rathi narrated in detail the stories of the first four incarnations of Lord Vishnu – The Matsya (fish), Kurma (tortoise), Varaha (wild boar), Narasimha (lion-man). These stories were retold in a childlike way as a theatrical narrative; as the story of evolution keeping in mind Sri Aurobindo’s words.

Rathi and Priti initiated Folk art styles and motivated the children to make puppets of the forms of Fish, Turtle, Boar and Lion (the first four incarnations) using the folk-art technique of Gond and Bhil art styles.

The children enjoyed listening to the stories and were very keen to absorb the detailed narrative. They also relished making the different puppets and enthusiastically presented their own creative puppet shows. They also learnt how to create their own patterns using the Folk-art styles and use them functionally. 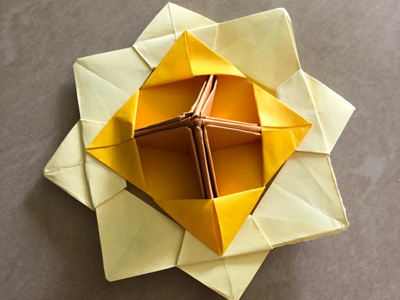 Abhipsa started with elements of art - the basic understanding of line, patterns and colours, and through that created Madhubani art.

Then she took up Origami, the Japanese art, starting from a very simple box to challenging levels. The children made things like lantern, box and a spinning top. It was a journey from knowing simple to complicated things. The children developed concentration levels, fine motor skills, hand-eye coordination and learnt how to tackle challenges when the folding became more difficult and intricate. They enjoyed the Origami challenge throughout the camp. Elements of drawing made them understand that by perfect lines and shapes so much one can create and paint. Their physical presencewas missed, but the virtual platform brought the learning to another new dimension.

Fun with Math and storytelling

Music makes everyone happy! So, with a short musical dance, Sumedha started the ‘Fun with Math’ session, where the children simplified mathematical multiplication problems using Vedic mathematical techniques and Finger Multiplication, solving them in seconds. The second session was about understanding the need of mathematics in daily life, inspiring stories of few mathematicians who changed the world like Friedrich Gauss and Ramanujam. The children identified mathematical patterns in the objects around them like the calendar, clock etc. and were introduced to a Japanese Arithmetic and Logical Puzzle KEN-KEN, which works as a Brain Booster.

Sumedha also took a story from Upanishads to emphasize the importance of Self-Realisation, humility, Oneness and how Shvetaketu, a learned Brahmin who knew everything which was in Vedas learnt the above lessons. This session was combined with children drawing Indian cow using their imagination.

The children were made conscious that an integral development was needed to feel happy and healthy. Shweta who is a trained Yoga facilitator playfully conducted Yoga asanas with the children making them do challenging postures. This brought about a cheerful and dynamic energy in the sessions.

Understanding Our Children – by Shivakumar 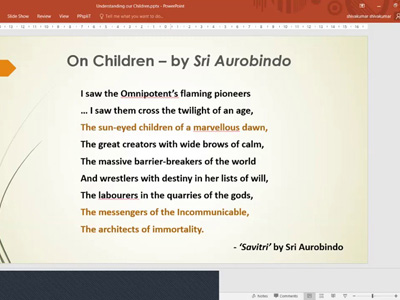 Shivakumar took a session titled “Understanding our Children” with the parents of the Rainbow Dreams online programme on July 26, 2020. During the session, he took up the poem of Kahlil Gibran “On Children” and explored his deeper way of looking at one’s own children. Children are not to be looked upon by parents as belonging to them, nor could they decide how their children will grow; children are Life’s longing for itself and that the parents are the bow in which the Divine Archer sets the arrows, the children, on their path of self-discovery and self-fulfillment. He followed it up with a passage from Savitri by Sri Aurobindo, where the children are looked upon as the “architects of immortality”, those who are here to realise the future of humanity. Shivakumar concluded the interaction with some tips from the Mother for the Parents.