All the sessions were conducted by Shivakumar and Priti of SAFIER.  The participants undertook a transformational journey through the principles and practice of Integral Education, as envisioned by Sri Aurobindo and the Mother. 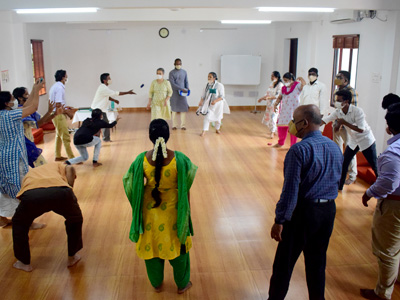 Getting to know each other – An icebreaker

The participants played a naming game whereby they playfully learnt each other's name through a game. Thus everyone got warmed up to each other and were ready for the sessions.

A look at the Present-day Education

Shivakumar presented an intriguing relook at our current education system, which concentrates largely on subjects and methodology which are hardly of any value in our practical day-to-day life, except for the basics. This session was followed by an orientation on ‘What is Integral Education?’ and its need in the lives of teachers as well as students in the light of Sri Aurobindo and the Mother. 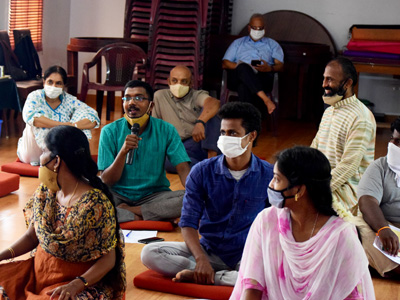 The following topics were covered in this session:

Then Shivakumar explained that it is not sufficient that education should be only child-centered, it should be teacher-centered too. The teachers need to educate themselves first in order to educate the children. For that they need to know themselves. In order to know oneself better a skit was performed “The three Monkeys and Psychic being” with the help of a magic mirror. 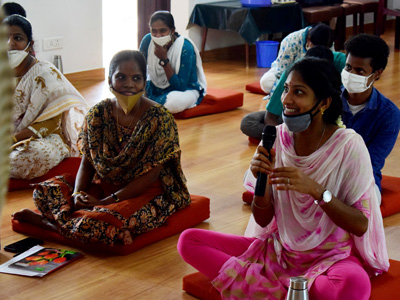 Through the skit the four aspects of a human being were mirrored - The Physical, the Vital, the Mental and the important one, Psychic being or the Soul, which calms the other three. As the skit processed, Shivakumar addressed the different activities of the different parts of the being.

Shivakumar made things more clear with the help of a questionnaire, which made the participants conscious about the activities related to different aspects of our being in everyday life.

Priti continued the session with an exercise that made everyone aware of their physical, Emotional and Mental consciousness through activities. After the experience they had through each activity, the participants evaluated in which part of their personality their ‘I’ was located the most and wrote down the observations.  By noting down their observations and sharing, they experienced the different parts of their being in a deeper way. 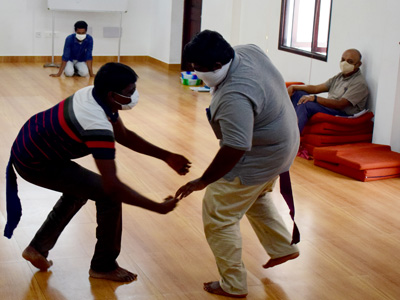 Two awareness games were played so that through games the participants could turn their attention to what part of one’s being was being activated and thereby become conscious in order to use it judiciously. Played like this, the games release excess energy and create a jolly atmosphere while working on attention. However, it can also be played in silence to help gather the attention and create a concentrated atmosphere. Games like these also help to develop the faculty of concentration for better body and mind coordination. When played with awareness they further stimulate the Vital, the Mental along with the Physical parts of one’s being and create a more conscious atmosphere collectively.

A peek into an Integral classroom

The session began with an interesting real life story followed by a game which led the participants to have a glimpse of the working of an Integral classroom. The qualities of an Integral teacher were discussed. Then Priti gave an introduction to Project method with case studies of Project implementations in a free progress environment. She also enunciated the three principles of True Teaching given by Sri Aurobindo as a basis for project implementation.

The sessions were aimed at developing an experiential understanding of Integral education in the participants. This was done so that the participants understood the pressing need of a teacher-centric education in today’s world scenario: the teacher in order to create an appropriate physical and psychological environment in classrooms and in the lives of their students has to start transforming one’s own inner environment in order to be effective. The sessions also provided a glimpse to teaching methods in an integral environment. 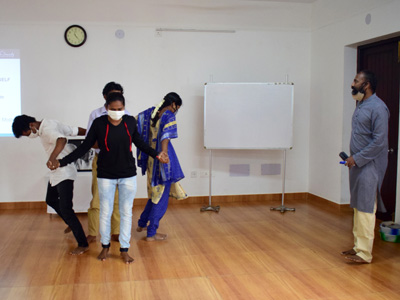 Some feedback by the Participants

“I liked the skit the most. It touched the chord and revealed the truth in a simple and playful manner. I have experienced this but didn't know how it could be presented. This was the best gift I came home with.”

“The awareness games were super fun. It really added a delight in an unconscious turn of the mind around from outer focus to inner focus. I liked the workshop because I got to know the Svarnim team and the hidden gems they have. I also enjoyed it because I realised that I have to focus on myself instead of focusing on my students’/child’s shortcomings.”

“The way Integral education was explained was good, easy to understand. The story telling actually made me curious to know what will happen next. This is another way of learning. I’m happy to be a part of this, it’s a good experience for me.”

“The workshop made me realize myself. I started to differentiate the Mind, Emotions and Physical and Myself (the inner friend). I also understood that to lead the team, we have to lead our three monkeys first. I would like to do a complete course in Integral Education, if possible.”