The Story of Change - Success Story of an Inmate 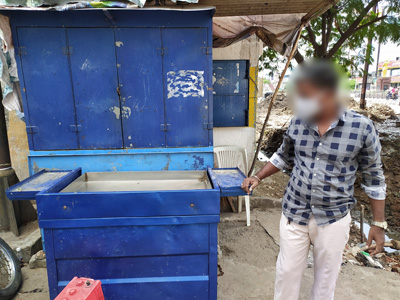 Prison is a term that brings negative connotations among people. But, prison is a place, where men and women, who commit crimes, need to be rehabilitated and reformed.

Prison Reformation Project initiated certain activities to bring transformation in the lives of prisoners. It firmly believes that negative thoughts would be changed when prisoners are engaged in something productive. It was this objective some activities were initiated and it had indeed brought many changes in the lives of prisoners. We have Mr. Solomon who is one of those who life has transformed because of this initiatives and the activities. Mr. Solomon like many others spent a major portion of his lifetime in prison for the hasty decisions they take. Mr. Solomon was an auto driver at that time and was living a peaceful life with his wife and son. He was a habitual drunkard and disregarded the advice of many people on the adverse consequences of this habit. While he was living a hassle-free life with his family, because of his alcoholism, he landed in a big trouble. He had an aggressive fight with his fellow driver and eventually killed him. This gruesome incident happened when he was under the intoxication of alcohol.  He was not be in a position to control his temper. He regretted for his instant act, but that was of no use.  He had to leave behind this lovable family and jailed for his crime.

He was sentenced to life imprisonment for 18 years. He realised in the prison that his acts had affected his surroundings morally and psychologically. Anger is temporary insanity that would sometimes put the life of many people into trouble. He correctly understood that his anger was indeed the source of the problem and he was ready to mend his way to reduce his temper level.

When the Puthiya Nambikkai project was launched in the Central Prison, Pondicherry, Solomon was one of the most enthusiastic inmates, though at times he was feeling very low for the crime he committed, he was very firm that he will face the sentence and was waiting for a new dawn of his future. To make his dreams come true, Puthiya Nambikkai Project supported him a lot. He was trained on many life skill activities such as farming and mat making.  He also joined the yoga, meditation classes that were conducted for the prisoners.  He was actively involved in sports and the regular counselling helped him to come out as a new leaf.  He was a very active inmate and had shown his good commitment in most of the trainings that were given.

A series of counselling sessions were given to his family members as well. Solomon is now a proud father of three children. Their academic expenses of his children are taken care of by the Puthiya Nambikkai Project and he expressed his immense thanks. The yoga and meditation classes transformed him a lot in controlling his anger and gave him confidence in life. His positive attitude and behaviour made him come out of prison in 2018, as a completely-transformed person.

In 2019, he established a small tea shop near the Pondicherry bus stand. Puthiya Nambikkai Project supported him by giving some utensils for opening the shop. His life changed and his family are now very happy on behavioural change. The project member keeps monitoring Solomon to ensure that he is not committing any unlawful activities.

SOLOMON IN HIS TEA STALL – NOW LOCKED DUE TO COVID

During lockdown, Mr. Solomon and his family began to struggle without having any source of income. He was restricted to run his tea shop as the government imposed section 144. He was then offered a tea can to sell tea on the roadside streets. He is gradually building himself to be financially stabilised and spend his lifetime with his family. He said that he is always thankful to Sri Aurobindo Society for their selfless service towards the prison inmates.  He further says it is because of their trainings he is now a responsible head of the family apart from being a productive citizen of the country.  After his comeback from the prison, he never wants to miss his family again. He indeed moulded himself to be a perfect person.

“Every soul is redeemable and Mr. Solomon is a tip of the iceberg”.