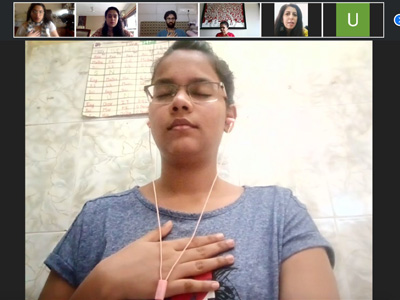 The fifth edition of the Auro Youth Camp was held virtually during the national lockdown and was attended by 21 girls from the NGO Udayan Shalini.

It was organized by the Mumbai branch of Sri Aurobindo Society and conducted by Ms. Anahita Sanjana and her team: Shailaja Munshi, Tanushka Vaid, Ashumi Mehta, Priyasha Murarka, Avinaash Modi, and Prarthna Aggarwal.

The session started with an activity on the Buddhist principle of Metta.  This principle lays down the importance of sending out vibrations of love and healing into the universe instead of hatred, and watching the world change automatically. This was followed by an activity on unleashing the powers of the subconscious mind by first removing the negativity.  Negativity was removed by writing letters to life or the Divine about the problems and then tearing them up.  This was followed by positive visualizations about the life that people want to create for themselves.

The last activity was named ‘The Lighthouse’ in which the girls were asked to illustrate the storms in their lives and the lighthouses that have lead them.  The coordinators spoke to the girls how each one is carrying their own lighthouse within their deeper selves.

To tie together the session, the Mother and Sri Aurobindo were introduced to the girls and the coordinators spoke briefly about their life and mission. The Mother’s chant was also sang to activate the deeper selves.

The girls left feeling peaceful and empowered to deal with their life situations better.