COVID 19 has completely devastated the whole world in various aspects including health, economy, education and all vital modes of life. This pandemic has affected all facets of people both the rich and poor and all have experienced great trouble during this lock-down period. Though people in the cities were able to manage with whatever they had, people in the villages were the worst sufferers. Lack of income, work opportunities, sudden increased prices of essential commodities made the villagers suffer severely.  In most of the houses, bare minimum of only one meal per day was taken by the villagers. The destitute women, vulnerable and aged people were leading their life by going daily jobs for which they received daily wages. These people have suffered hugely and SARVAM planned to help people like them in their project villages. SARVAM is working in more than 20 villages in the Villupuram District of Tamil Nadu and many poor people were identified in these people through the village coordinators and in the first phase around 250 people were helped with food kits. Each kit was worth Rs. 400/- and it contained rice, dhal, soap and mask. This food kit was very much useful to the villagers who were unable to buy their essentials.

The severity and spread of COVID19 is increasing rapidly and the Government of India has increased the lockdown for the third time for two more weeks from May 4th. This has resulted to more troubles to the people in the villages and considering this fact, SARVAM in the second phase has identified to help 1750 families in the villages.  Each food kit worth around Rs. 350 to 400/- were distributed to all the poor families. SARVAM is sure that this will help them to sustain for a few more weeks. 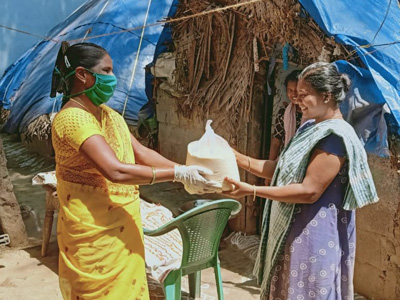 In total around 6 lakh rupees were spent in the second phase towards helping people. The distribution of food kit were done by the village coordinators. While distributing the kits, all the coordinators were advised to follow social distancing and also to use face masks and gloves.  Through this, SARVAM helped in creating and spreading awareness to the village people about safeguarding them from the virus attack. With the help of students and coordinators, all the people are given door-to-door counseling on how one can be safe from the virus attack.

So far around 2000 families have been provided with the food kits in both the two phases. All the people were very happy after receiving the food kits and they thanked SARVAM, and Sri Aurobindo Society for the timely support.