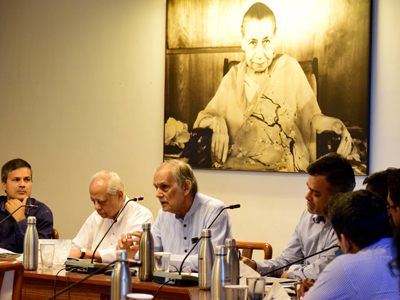 Having in mind 15 Aug 2022, by when SAS is planning to bring in the Svarnim Puducherry initiative, a half-day consultative meet with the three change makers, vis-à-vis The Government of Puducherry, The Confederation of Indian Industry (CII) and Sri Aurobindo Society was organized on the 13 Feb 2020. Shri. M. Kalaiselvan, Chairman, CII, along with the senior officials of CII participated in this consultative meet.

The objective of the consultative meet was to catalyse the work of Svarnim Puducherry.

Shri. Pradeep Narang gave an outline of SAS and Shri. Vijay Poddar spoke about the various works carried out by SAS. While speaking, Shri. Anbarasu, the Development Commissioner insisted that all the three parties – the government, the corporates, and the NGOs should join hand in hand so that “impossible” can become “I’m possible.”  He further stressed a good amount of work had already been done by SAS and it is now time for the other two stakeholders to participate in this and make it a grand success.

Shri. M. Kalaiselvan, Chairman, CII, spoke about the various projects that the Pondicherry Chapter of CII is undertaking in the city.  He emphasised that the main aim of CII is to eradicate TB and bring in employment for all.  Since SAS is into many verticals, he said CII will be happy to participate in all the projects possible.

The Chief Secretary, Shri. Ashwani Kumar while addressing applauded the work of SAS.  He admitted the fact that the government alone cannot make wonders happen instead it should be the participation of one and all to make this happen.  He further added that this consultative meet, will make everyone participate and not only make Puducherry golden but the entire India Golden. The Government officials and the stakeholders of CII have agreed to participate collaboratively in all the endeavours of SAS.

To make this happen, it was decided to form a core committee comprising of two to three representatives of all three stakeholders.  These representative will be meeting regularly and be in constant touch with one another and carry on with the developmental activities.

It was unanimously agreed that the short-term goal is to make Puducherry a golden Puducherry and the long-term goal will be golden India.