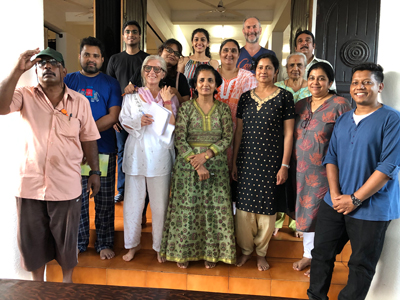 For 2 full days, on Jan 2 and 3, 2020, Ms. Lopa Mukherjee conducted a workshop on Emotional Intelligence in the Beach Office in Pondicherry. She is a writer, documentary maker and psychologist; and also an ex-student of the Sri Aurobindo International Centre of Education in Pondicherry. Some 20 people attended the training programme.

The subject of Emotional Intelligence was explored in 8 sessions, each of which dealt with a skill set needed for becoming more empathetic. Some of the topics were developing seeing skills, listening skills, compassionate speech, and so on. Each topic was elaborated upon and elucidated with the help of videos from films. Participants asked questions and shared some of their personal experiences. Each topic also required interactions between the participants. They formed groups of 2, 3 or 4, and practised the skills that were discussed. These group sessions lasted twenty minutes on an average. Participants were animatedly involved in the discussions and were eager to share their findings with the larger group. After 2 days of being together, a warm bond was formed among the participants and the facilitator.

A brief of what happened in each session:

Session 1: What is Emotional Intelligence?

The concept of emotional intelligence versus mental intelligence was discussed along with the importance of emotional intelligence. Some typical situations in life were taken up as case studies to discover how they can be dealt with the heart. In group sessions a particular problem was solved, where each group came up with empathetic solutions. At the end of the session, the whole group pondered together over the solutions. Participants heard of some social science experiments that are used to study people's behaviours.

Seeing skills were worked upon here with the help of film clippings that had micro-expressions. Participants had to guess the emotions of the actors and explain what clues of the body, tone of voice, choice of words, etc. made them conclude what they did. The context of the story was then discussed. There was a sharing session where participants paired to share an event in their life that gave the opportunity to the partner to match the words with the expressions. Seeing techniques of reading body language and anthropomorphising were analyzed through films.

Similar to seeing skills, in this session, listening skills were developed. Good patterns and the art of creating safety were discussed with film clippings. Participants paired up to practice deep listening. There was a session together after the break-out to collate what was learnt.

Empathetic speaking techniques were discussed, as were non-violent communication, difficult conversations, multiplier pattern versus diminisher pattern. Film clippings were used to demonstrate good and bad patterns of speech. In groups of 3 participants took up a tricky life situation and discussed alternative solutions. Conflict resolution was discussed with the help of a film.

The unconscious habits and patterns that are shadows were discussed, as were defense and coping mechanisms. Films clippings showed some bad patterns and their remedies. Biases were discussed in detail. In groups of 3 participants discussed about the biases they observed in themselves and in their society. These biases were shared with the large group and analyzed whether they are implicit or explicit biases and what can be done about them.

Personality types were discussed and several models were taken up. Film clippings were used to show personality differences. Childhood trauma was looked at, and how these can determine adult behaviour. How a compassionate and tolerant society can be developed was talked about.

Bad power patterns and power victim coping techniques were studied in this session with the help of case studies. Each group worked on a particular problem, and after they shared their findings, a film clipping was used to see how it was solved by an emotionally intelligence story-teller.

Good patterns were discussed such as adult role modeling, granting and asking for forgiveness, compassionate speech, caring. The consequences of bad patterns were also discussed with the help of films. Participants had a chance to ask questions and share their personal findings of these patterns.

After a photo session and filling up of a short feedback form, the last session came to an end. The response was overwhelmingly positive. Such a workshop helps one to take charge of many tricky situations in life, and gives one the confidence that progress is always possible, and that a kind heart is a powerful source of goodness that spreads its ripples far and wide.