The best way of helping others is to transform oneself. Be perfect and you will be in a position to bring perfection to the world.

Award of Excellence in the 26th International Yoga Festival 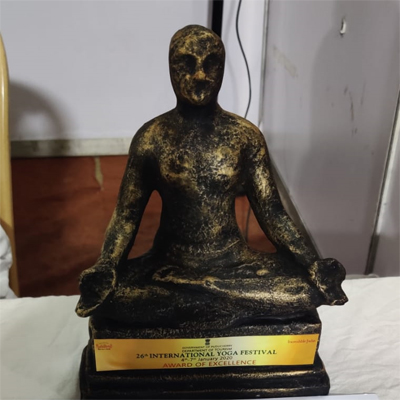 Under the supervision and able guidance of Dr. Sampadananda Mishra a few programmes were organised on behalf of Sri Aurobindo Society. Representatives from Sri Aurobindo Ashram, SACAR, Auroville, Kallarigram actively participated in this collective programme that took place in the Gandhi Thidal opposite to the Mahatma Gandhi statue on the Beach Road. 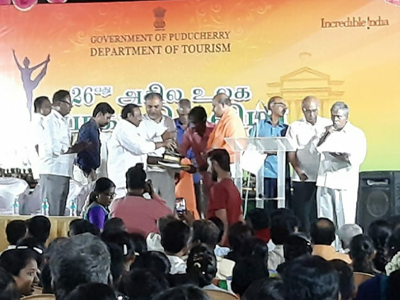 The programme was attended by hundreds of people and was very well appreciated.

Ms. Deepa Vaitheeshwaran from Kalarigram gave a wonderful introduction to Sri Aurobindo and his Ashram at the commencement of the cultural event and compered the entire event.

At the end of the International Yoga Festival, as icing to the cake, SAS was bestowed with the "Award of Excellence" by the Government of Puducherry, Department of Tourism for its active participation in organising the “Mass Yoga Programme”.

Dr. Sampadananda Mishra received the "Award of Excellence" on behalf of SAS from the dignitaries during the valedictory function that was held on 7th January, 2020 at the Art and Craft Village, Puducherry.