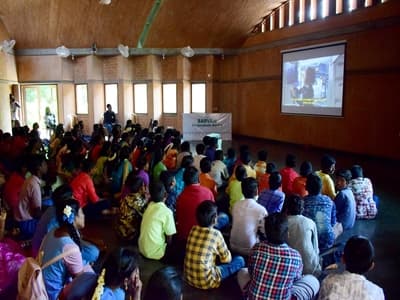 Day for kids from SARVAM villages and Satya Special School. The film festival was conducted on 10th November 2019 at Sharanam campus from 10.am to 5 pm. More than 100 enthusiastic kids from the surrounding villages and Satya Special School joined in this event to make it a grand success.  They enjoyed and as well learned a lot through films screened. The main objective of this Film Festival was to create awareness among the kids about society and also to imbibe in them some moral values.

The joyous day started by giving an insight to the kids about the movies they will be watching the day long.  The kids were asked to concentrate on the little nuances of each movie.

Initially, two movies of Charlie Chaplin were screened, which gave much joy to the students. Their enjoyment could be very well felt. Then a Tamil Short film on teaching the importance of savings and hard work was shown. This film motivated all the students and they learnt the importance of savings in their life.

Next, an Iranian movie “Children of Heaven” was played for the students. This was a world-class movie and students were able to understand the theme and plot of the movie easily. The trainer who conducted the session explained the story in between in the mother tongue so that students were able to follow the film continuously.  At the end of the movie, the kids were asked to narrate what they had learned and what they had understood from watching the movie.

Kids were then shown a documentary film “Blue Planet.” This film educated all the students about various living beings and the wonderful aspect of nature. Animals which kids have not seen so far and the beauty of nature were explored through this movie. This helped the kids to know the hidden vastness of nature and its beauty.

The kids also watched a film called “spring” and after this movie, the kids took an oath not to harm animals. The importance of animals to human beings was very well portrayed in this movie.

At the end of the session, RJ. Karun, Radio Jockey from 92.7 Big FM was invited and he interacted with all the kids regarding the movies they watched and also about the aspect which they have learned. RJ. Karun also screened a musical short called “IRU KAI PURATCHI” which is an initiative undertaken by him to create awareness about washing hands properly. The kids enjoyed the lyrics and music. This musical short was screened for the first time Sharanam exclusively for the kids of Sarvam and Satya Special School.  Kids were asked to narrate what they have understood from the video and they were also asked to tell about the 7 ways of washing hands properly. The best part of the interaction was the kids were given a chance to perform live on the Sarvam’s FM Radio Station. Some of the kids were selected and they were asked to narrate their experiences of watching films in the film festival. This motivated the kids and gave much confidence in them.  An indirect objective was to improve the public speaking skills of the kids.  They also were asked to talk about the IRI KAI PURATCHI video in the FM.

The festival was designed by the AuroMedia team.  Movies were selected after giving much thought to even the minute of details.  Ms. Suman Kittur, a well-known Kannada movie director was the Artistic Director and Ms. Shruthi was the chief coordinator of this Auro Children’s Film Festival.

It was not only an enjoyment for the kids, but also for the organizers.  All kids took with them valuable lessons and the organizers could understand many untold stories from the happy faces of the kids.