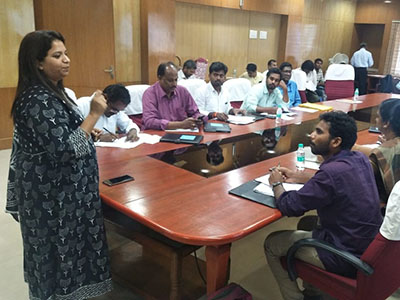 in Chennai for the South Indian officials running Community Radio Stations. Two Coordinators from Sarvam, Pudiya Udayam Community Radio 91.2 had the privilege to participate in this workshop.  Around 54 participants from various community radio stations attended this training programme and learnt a lot on how useful and successful a community radio station can serve the society. Thirdly, the power of community radio stations was explained to all the participants. The trainers explained that they play a vital role in creating awareness about many aspects that are in the community. Methods to run the community radio station in a self-sustainable manner were also discussed.

Another important factor which was discussed during the training was about the reach of the community radio station. Trainers emphasised on the need for more reach of these stations so that it will be easy to run the station successfully.  Tips were shared on how to improve the reach of these stations to a large number of people.  Broadcasting the programmes on YouTube and other online channels to estimate the number of viewers were also discussed in this meeting.  This will help us to keep a record of programmes that are preferred by the people and more such programmes can be produced and uploaded in the future. The importance of listeners was explained by the trainers and they said that only when more number of people listens to the programmes there is a point in running the station successfully and in an enthusiastic manner.

The challenges and the ways to face and come out of them were also discussed in this meeting.