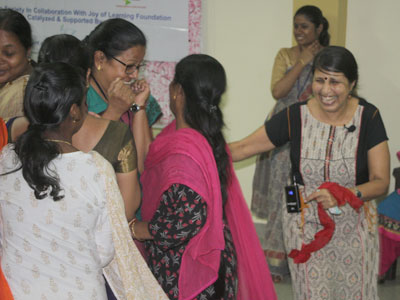 A 2-day capacity building workshop for middle and high school science teachers was organized by Sri Aurobindo Society and Joy of Learning Foundation in collaboration with SRV School, Samayapuram, Tiruchirappalli. Around 29 teachers teaching Science for grades 6th to 10th belonging to 2 of the SRV schools participated in the workshop.  Among the two schools, one school follows the CBSE syllabus and the other school follows the State board syllabus.  This school has been actively organizing such workshops for the professional development of the teachers thereby benefitting the children in all ways.

The hands-on training was given by the eminent team consisting of: 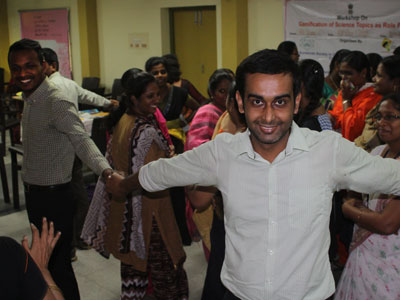 The workshop mainly conveyed the teachers how role play can be introduced while teaching some important topics in the classroom.  Topics that were explained in detail through role play were Particle nature of matter and Atomic structure and chemical bonding.  Only if a student has a strong foundation in these topics, he will feel science to be an interesting subject.  This role play will certainly make a dormant session into an active session.  At the end of the second day, the teachers felt that they are carrying a lot new ideas with them and these ideas when spread to the student community will certainly have a lasting effect on their understanding of the subject.

The activities of the workshop are briefly narrated below: 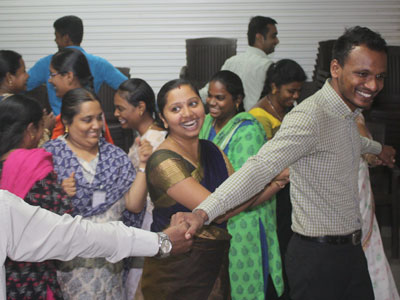 The particle nature of matter role play deals with interaction of particles of matter in solid, liquid and gaseous state. It brings out the change in interaction among matter particles with change in temperature, pressure and volume and their effect on each other. Phenomenon like melting, boiling / evaporation and Brownian motion were also explained in this role play. Participants played the roles of particles of matter and they also became the closed container. The ribbons were used to show the exchange of heat.

The following concepts were covered in this role play: 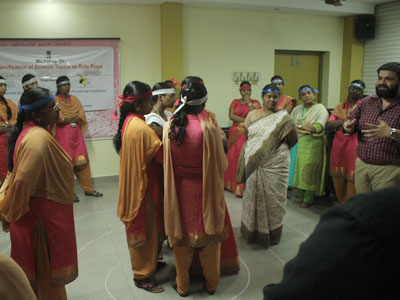 The ribbons in red represent Protons, white Electrons and Blue Neutrons. The innermost circle on the floor represents the nucleus and other outer circles represent different energy levels (shells).

3.2 Chemical Bonding role play basically allowed teachers to play the role of atoms and they used bindis to show their valence electrons. The exchange of electrons were done easily and ionic bonds were also explained in an easier manner.

This activity was also used to show covalent bonding by sharing of electrons. 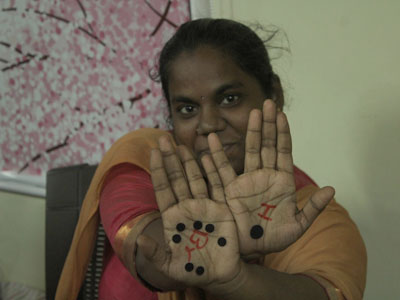 In this 2-day event, the organizers felt that the teachers felt themselves to be students and showed great enthusiasm in participating in the role plays.  They also requested more workshops to conduced in the similar lines so that learning and teaching becomes more easier.