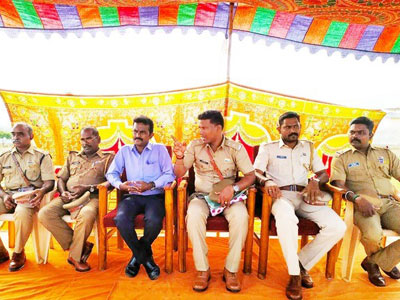 The 73rd Independence Day was celebrated with great enthusiasm at the central prison Puducherry. Like every year, this year also the SAS had organised the event.  The programme was inaugurated by the Superintendent of Jail, Mr.Gopinath who hoisted the National flag. In his Independence Day message, he stressed the importance of a better society for all to live at harmony and peace.  He wished to have a society that is free of violence and other criminal activities.  He also said that the inmates after learning yoga and meditation in the prison; are able to feel their inner calmness and happiness.  He added that this will surely reflect on their behavior when they are released from the jail and start leading a new life.

He thanked SAS for promoting such a valuable initiative.  He also said the Prison Department will support all necessary good initiatives, which are benefitting the inmates.  The Superintendent of jail had asked SAS to promote new activities so that the inmates get the utmost benefit and have a promising future.  He also congratulated SAS as the only organisation that meticulously supports the inmates of the prison. He also requested SAS's service should be a never-ending journey as this will directly contribute to the welfare of the inmates.

There were yoga and other drill activities performed by the inmates during this event.  The children of the inmates also participated in the colourful cultural events. The program ended with sharing of sweets with the inmates and their children.