Sri Aurobindo Society in collaboration with the Directorate of School Education and Teach To Learn initiative of IIT-Madras, launched an innovative educational program called ‘C Minus 4’ in ten Government Schools of Puducherry on the 9th of July 2019. The inauguration took place at the Conference facility of office of the Directorate of Education, Government of Puducherry. This is one of the education initiatives under the banner of Svarnim Puducherry (Golden Pondicherry), an initiative of Sri Aurobindo Society, designed as an offering to 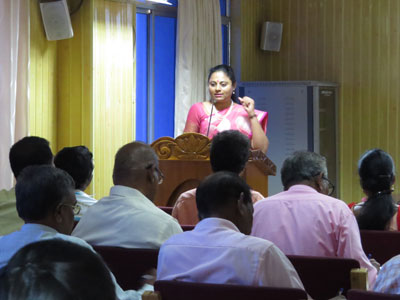 commemorate the 75th Year of Indian Independence as well as the 150th Birth Anniversary of Sri Aurobindo on the 15th of August 2022.

‘C minus 4’ Programme is part of an effort to create employable youth by imparting special skills and capacities in students by a well-tested program where Children of Class C (eg. Class 8) would be trained on cognitive and non-cognitive skills to teach Children of Class C minus 4 (eg. Class 4). The basic framework of the program has been designed by Teach to Learn, an initiative of the Department of Applied Mechanics, IIT Madras. 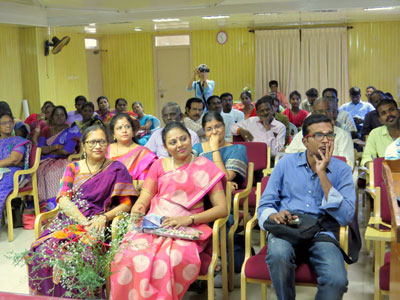 The programme was inaugurated by Sri. M. Kuppusamy, Joint Director, Directorate of School Education. Sri. Vijay Poddar, Member Executive, Admin & Finance, Sri Aurobindo Society, in his introductory remarks, invited the faculty members from the government schools to bring in new ideas to make education a joyful experience for the students. J. Augustine, Assistant District Programme Coordinator felicitated the team in his address to the audience. Prof. Pijush Ghosh, who had started the initiative of Teach To Learn with the support of his department of Applied Mechanics, IIT-Madras, gave an overview of the C Minus 4 program during the inaugural session. Mr. T.P. Raghunath, Director, Svarnim Puducherry, Sri Aurobindo Society proposed the vote of thanks. Overall coordination of the inaugural program and the following awareness session was done by Dr. P.R. Vinothkumar, Programme Coordinator, Puducherry, Sri Aurobindo Society.

The inaugural session was followed by an awareness workshop conducted by Prof. Pijush Ghosh and Ms. Anuradha, from Teach to Learn sharing various facets about the program including the objective, structure, methodology and impact along with a few interesting case studies from its earlier implementations in Tamil Nadu and West Bengal. It was a highly interactive discussion with active participation from the attending teachers from the selected schools. Around 30 teachers, including the principals, from 10 government schools attended the session. A 5-day training workshop is planned in the next month for selected teachers and students from these schools who would participate in the programme.