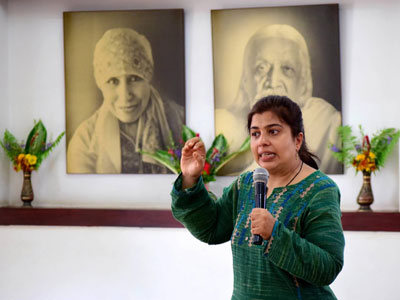 On June 27, 2019, Sri Aurobindo Foundation for Integral Education and Research (SAFIER), the educational wing of Sri Aurobindo Society, conducted two orientation sessions for the students and faculty of Bharatiya Vidya Bhavan’s Rajaji Vidyashram, Chennai. The first session covered an introduction to Sri Aurobindo, the Mother, Sri Aurobindo Ashram and the Sri Aurobindo International Centre of Education (SAICE), while the second session was about the importance of flowers and fragrances in light of the significances given by the Mother. 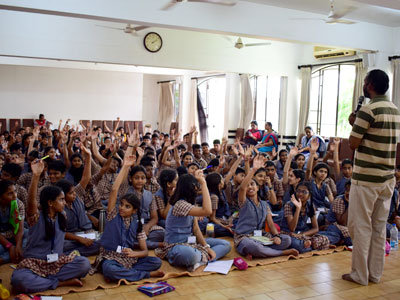 About 260 students of Class 7 and 20 teachers from one of this premier school of Chennai were on an educational retreat to Puducherry. Considering the number of students, the whole batch was divided into two groups of 130 students with 10 teachers each. Therefore, both the sessions were conducted twice, one in the morning and the other post-lunch, for easy accommodation and students’ understanding. The event was coordinated by Shivakumar, Director, SAFIER, and Dr Padmini of the Bhavan’s School.

An Introduction to Puducherry and Sri Aurobindo Ashram

The programme started with 2 minutes of meditation on the Mother’s music, and it was heartening to see that the students were very calm and focussed throughout the duration of meditation. 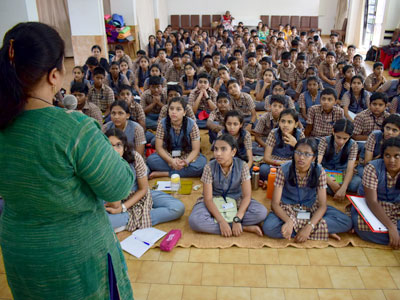 Shivakumar welcomed them all and thereafter, Puja, one of the resource persons from the Society first introduced the town and established the connection of the town with the Ashram. This was addressed by primarily introducing Sri Aurobindo, his unusual childhood, life in England and his extreme brilliance and genius as a student, followed by a short journey through his life as a freedom fighter, nationalist and then the spiritual Light he became after his arrival to Pondicherry.

The introduction to Sri Aurobindo was followed by a narrative of how the Mother arrived in India and an overview of how the Ashram was formed, the Mother’s contribution in establishing, managing and developing the Ashram and especially the school, and finally a lively discussion on the uniqueness of the Ashram School or SAICE. A very interesting part of this session was a question–answers session with the students asking them: “What would be the characteristics or features of your dream school?” To the sheer astonishment of the students of this reputable school, the Centre of Education consists of almost all the attributes they described in their dream school. Even the teachers were extremely excited to know about the organization and methodology of education being imparted at the SAICE. 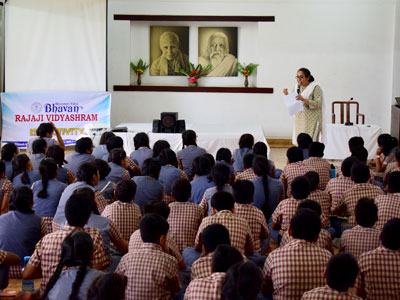 Flowers and the Significances Given to Them by the Mother

The next interaction by the students was with Priti, another resource person of the Society, on the ‘spiritual significance of flowers’ as given by the Mother. The students keenly listened to the stories related to the Mother and her friendship with the world of Nature. They were curious to know more and enthusiastically participated throughout the session, with many thoughts and questions.

As they were doing a project in school on ‘Flowers and Their Fragrances’, they were already very deeply involved in the topic. They were astounded when they heard that the Mother had given names to the flowers according to their consciousness and characteristics – be it colour, shape, scent or even depending on a legend associated with them. These names then had developed into a language of flowers which all the Ashramites use when they have to communicate with each other or earlier with the Mother too, or understand the importance of the blessings from the Mother which they received in the form of flowers. 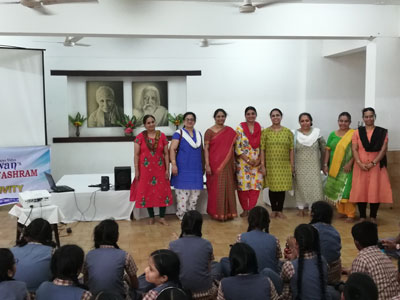 The children quickly grasped many names of flowers, for example the pomegranate flower is called ‘Divine Love’ and the Champa or Plumeria flower is called ‘Psychological Perfection’ while Jasmine is ‘Purity’ and Rose is ‘Love for the Divine’. A brief mention of the life of the great scientist Jagdish Chandra Bose who studied ‘plant intelligence’ was made in order to address the scientific temper of the students. They even made an effort to grasp the deeper meanings of the flowers and give names to them according to their relationship with them, when they went into silence and became one with flowers. They went back enriched with a whole new world of flowers.

For all the students and teachers, their trip acquired a much more meaningful and substantial appeal after this programme, as they realized the historical and spiritual depth of the place. It was an equally profound experience for both the facilitators of the Society and the participants of Bhavan’s School.