Make of thy daily way a pilgrimage, for through small joys and griefs thou mov'st towards God. 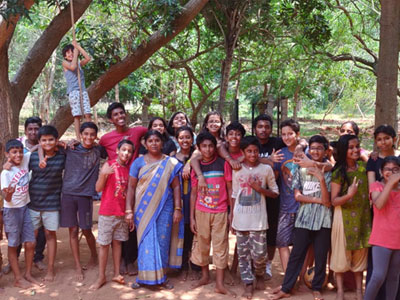 Kalarigram is a traditional school teaching Kalaripayattu (an ancient Indian martial art that also practices time-honoured methods of healing), established in 1950, situated amidst serene, green surroundings at Edayanchavadi. Headed by Guru Lakshmanan Gurukkal, the institution also serves as a resource centre for learners from various parts of the country and the world in ancient Indian scientific heritage, Indian culture, and aesthetics. 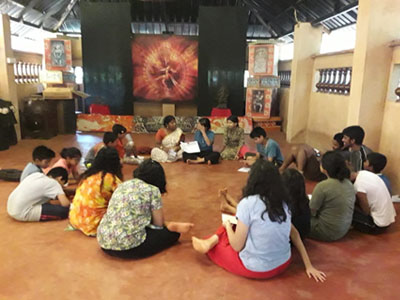 As part of its annual activities, Kalarigram recently organized KUTHUHALAM 2019, a study camp for children between May 1 and 15, 2019. Sanskrit learning was a component in this study camp, and SAFIC assigned one teacher, Ms. Rajkumari, to be the Sanskrit resource person for this camp.

Ms. Rajakumari took Sanskrit classes at Kalarigram every day for 1.5 hours for the entire duration of the study camp. For the first few days all 23 camp participants from the ages 8 to 15 were included in one group, but later the classes were arranged in two batches to allow more individualized attention. 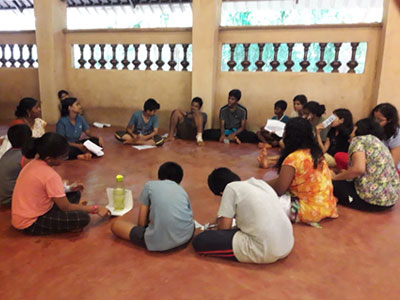 Shri Viswanathan, a Sanskrit enthusiast and SAFIC volunteer, also visited the study camp on May 7 and interacted with the children. He spoke very engagingly and interestingly to the children about the need to learn Sanskrit because it is a treasure house of all the richness of Indian culture, including the large number of scientific, literary, artistic, aesthetic and technological treatises left for us by our ancestors.

The children expressed great enthusiasm and interest in learning Sanskrit, despite of their hectic Kalaripayattu practice sessions.

The study camp was a rewarding experience for the children as well as for the SAFIC teacher. While the children received a little taste of the nectar of Sanskrit, Ms. Rajkumari felt that as a teacher she enjoyed exploring and coming up with innovative and interesting ways to reach Sanskrit to children.