News from Our Centres and Branches – March 2019 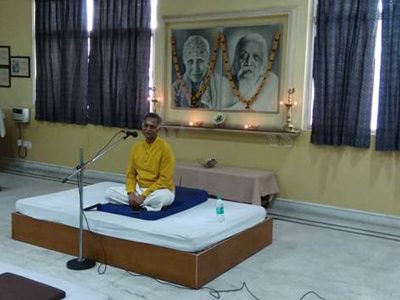 Screenings of the following videos of talks by Dr. Alok Pandey were presented throughout March 2019 at our Noida branch: Following the video talks, Savitri reading sessions were conducted every Sunday through the month.

A Declamation Contest was held for students of Noida Colleges on March 26, 2019, on the following topics: “Contribution of Youth in Resurgence of India” (English) and “भारत के पुनरुत्थान में युवा पीढ़ी का योगदान” (Hindi). [The Rolling Trophy was won by ITS Engineering College. Besides, the first three speakers were honoured with personal trophies and all participants were presented with certificates and books.] 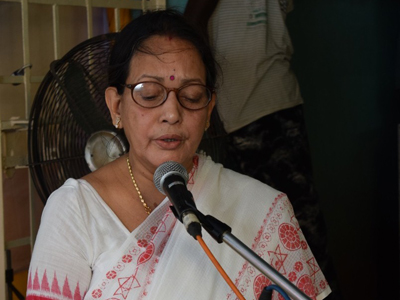 Sri Aurobindo Society, South Calcutta centre (WC-37) has been one such centre in West Bengal which was yet to have a definite space identified to carry out various activities. Therefore, it was a joyful event when an ardent devotee, Shri N. C. Mallick and his family, came forward to help set up an establishment from where the South Kolkata center could function. Shri Mallick offered a portion of the ground floor of his house, which includes a large room for meditation, has a main entrance and an area for reception and a large garage space allocated for library and workshop.

The auspicious day of March 29, the Mother’s first meeting with Sri Aurobindo in the year 1914 at Puducherry (then Pondicherry), was selected for its inaugural ceremony. A wide open space in front of the house was well-decorated for the function.

The opening ceremony was presided over by 99-year-old Shri Purnendu Prasad Bhattacharya, Chairman of Sri Aurobindo Society, South Calcutta centre. Later devotees joined the meditation for 15 min with the Mother’s organ music. Following the invocation of the Mother, the programme started with, 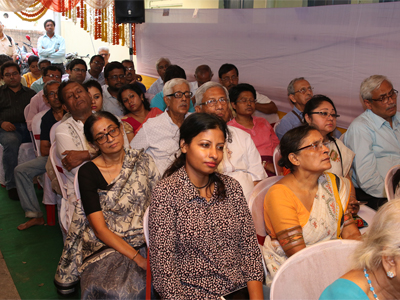 1)         A beautiful song of Sadhak Nishikanta sung by Nandita Roy
2)         Inaugural speech by Shri Purnendu Prasad Bhattacharya, Chairman
3)         Power point presentation on the historical spiritual moment of the Mother’s first meeting     with Sri Aurobindo titled ‘Divine Moment’
4)         Talk by Prof. Bishwanath Roy on Sri Aurobindo Society and its motto given by the Mother, Founder and Permanent President of Sri Aurobindo Society
5)         Conclusion with the Mother’s song by Suktara Ganguly

The programme concluded with a vote of thanks by Shri N. C. Mallick and Shri S. Mukhopadhyay, the key person responsible for all of the day’s activities. 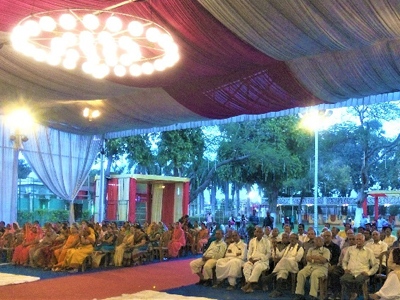 A one-day programme on ‘Bhagvat’ was organized as a joint family venture of Dr S C Sharma on March 24, 2019, at the beautiful garden ‘Mangalam Vatika’ in Gwalior.

Pandit Ramswaroop Shashtri, a noted senior scholar of Gwalior, narrated the ‘Bhagvat’ for several hours. It was attended by a moderately large gathering of men and women. The surroundings echoed with the devotional classical music on Divine Love.

At the end of the programme, Shri B M Sharma, Divisional Commissioner of Gwalior, addressed the gathering on the central theme of the ‘Bhagvat’. A book Bhagvat Ka Shashvat Sandesh written by Dr S C Sharma was released by the Chief Guest, Sri B M Sharma, on this occasion.