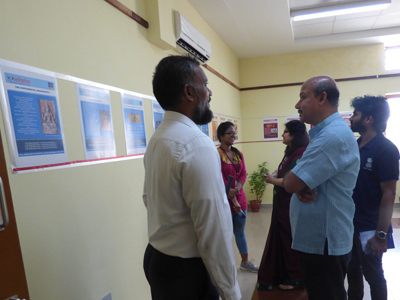 Nari Shakti: Woman, An Indomitable Spirit – an exhibition conceived and created by SAFIC was inaugurated at Pondicherry University by the Vice Chancellor Professor Gurmeet Singh. This exhibition is part of the two-week programme on International Women's Day launched by the university’s Center for Women's Studies.

The SAFIC exhibition content emphasizes ‘Shakti’ as the primordial cosmic energy which represents the dynamic forces that are thought to move through the entire universe. This shakti is, in essence, the divine feminine creative power, often referred to as ‘The Great Divine Mother’ in Indian religio-spiritual traditions. In a brief introduction and presentation about the exhibition, it was highlighted that the ‘woman’ in Indian culture has been traditionally seen as the shakti—the force and energy. This is not to say that shakti is something to be found only in women. It is the creative power, the energy present in all of us, but the nature of this energy is feminine because it is only the female who has the potential to create new beings within herself. All creation—material, intellectual, aesthetic, spiritual—is possible only because of the shakti, the cosmic energy.

The exhibition also explores the different ways in which the Shakti aspect in the woman expresses itself. Here we are guided by Sri Aurobindo’s description of the Four Great Powers of the Mother, the Mahashakti. Some of the posters in the exhibition explore the Mahashakti and each of her four powers through selected stories of women—from Vedic to contemporary times—women who embody the shakti, who express one or more powers of the great Mahashakti through their chosen field of work and the various roles they play in life, who reflect one or more of these powers through their very presence. 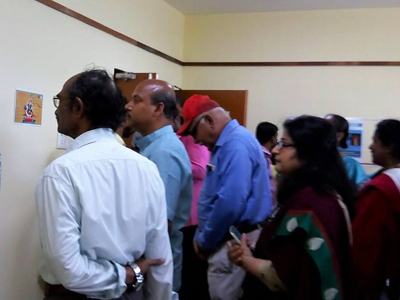 After the presentation, some students expressed interest in learning more about how we may apply Indian knowledge and cultural traditions to understand the contemporary realities in Indian society and particularly issues concerning women such as gender equality and parity, empowerment, role definition of genders, etc. A stimulating exchange of thoughts and viewpoints followed the introduction, and as a follow-up the students were invited to visit SAFIC for extended exploration of these and other topics of interest.

The exhibition will continue from February 25 to March 11, 2019, at Silver Jubilee Campus, Department of Electronic Media and Mass Communication (EMMC) Exhibition Hall.