News From Our Centres and Branches - February 2019 On all Sundays in January 2019, there were screenings of video of talks by Dr. Alok Pandey on various topics.  On January 6, 13, 20 and 27, the talks’ topics covered were “Savitri Overview – Part 5 - The Victory Over Death & the Boons for Earth & Humanity”, “Surrender – the Beginning, Middle and End of Sri Aurobindo’s Yoga”, “Web of Forces & The World Play” and “Questions & Answers on Ashram & Fidelity to the Path”. Savitri reading sessions were also held on all these days.

On January 14, 2019, members of Indirapuram Centre conducted a Savitri reading session. This reading was started in July, 2017, at the Centre on Saturdays and concluded at SAS, Noida Branch, on the occasion of Makarshankranti.

On January 6, 2019, children from the rural areas performed an outstanding skit “Beti Bachao Beti Padhao” in the Society Hall to spread awareness of saving and educating the girl child. People of various towns also came to watch the event.

“Beti Bachao Beti Padhao” was also performed on January 9 in Haridaspur Village for the rural people; on January 13 in Keeratpur Village and on January 14, in Uttaranchal Purvanchal Mahasabha Khichdi Mela on the occasion of Makarshankranti in which more than 1,000 people attended at Lake Paradise. 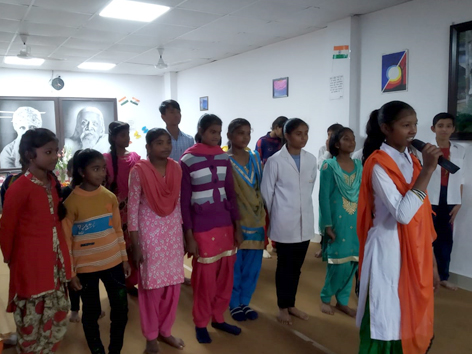 People in all the villages watching the skit were highly moved and many were in tears and appreciated the efforts of the Society in spreading the message of such a sensitive and important issue. The children’s performance is expected to leave long-lasting impressions on the minds of the audience.

The Society also made efforts to clean nearby villages, and children who are part of the Society gathered together and cleaned Keeratpur Village under the slogan “Safai Abhiyaan Swachh Bharat”. 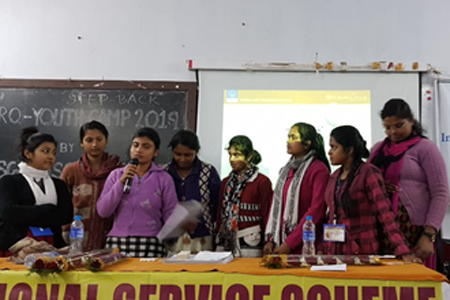 A picnic was arranged on January 12, 2019, in Lake Paradise for 55 children who show up regularly at the Society. They enjoyed different games, rides, boating and were also served snacks.

On January 8, 2019, a one-day AuroYouth Youth Camp was conducted for around 50 participants at Serampore Girls’ College in West Bengal.