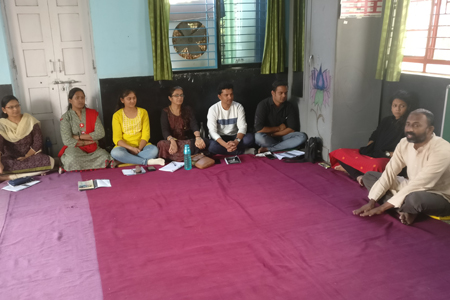 A 5-day workshop for teachers of Neevam—The School was conducted from December 13 to 17, 2018, at their school campus in  Amravati, Maharashtra. The facilitators were Shivakumar, Director, Sri Aurobindo Foundation for Integral Education and Research (SAFIER), Puducherry, and Riddhi Shah from Mumbai. The sessions were scheduled from 9am to 5pm every day, with a lunch and a tea break. More than 25 teachers of Neevam attended the sessions. 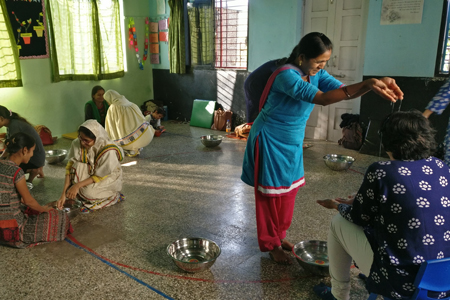 The first day commenced with a short meditation, followed by an activity involving imagination, insight and perspective. The teachers observed objects around, from different angles, trying to connect to an object. Then they imagined three changes in the properties of the object. The exercise helped teachers understand the perspective of a child when he/she looks at a new object.

On the second day, Shivakumar shared and discussed one of the quotes of the Mother (of Sri Aurobindo Ashram): “Look attentively into yourself to find out what, for you, is the most important thing, the thing you feel that you couldn’t do without. It is an interesting discovery.” 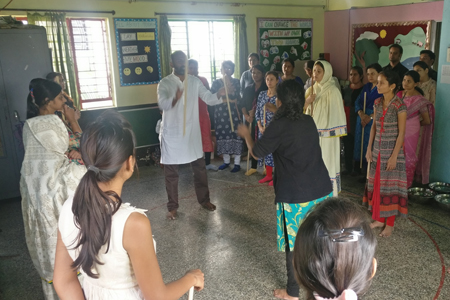 Through this, he explained the different parts of being and elaborated on it with a demonstration through the help of four volunteer teachers. The next session began with a memory game to re-gather attention. To explore the parts of the being further, the participants were split into groups asked to prepare an advertisement to sell a human-like robot. The last session of the day included a presentation to depict the reactions in the four parts of being.

The third day began with a short meditation activity, during which certain words (such as sunrise, maa, rape, hand, clouds, paneer, fire, etc.) were called out and everyone present was to observe the changes in the parts of our being. This was followed by discussion and sharing of experiences. 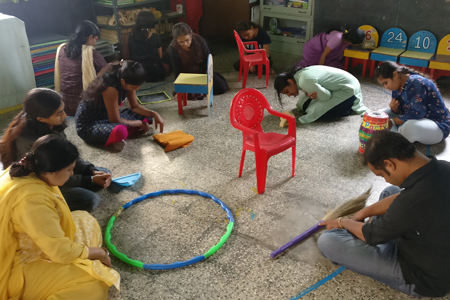 In the following session, the water element was introduced through its nature, sound and qualities. Large water bowls filled with water were kept and the water was felt gradually by different parts of the body.

The fourth day began with an activity meant to awaken the sense of rhythm, where four sounds were repeated at different speeds by different groups of people to bring back focus.

The teachers were asked to prepare a list of things they cannot do without. Initially a list of 10 things was made and was subsequently reduced to one to help realize where one’s focus lies. A short discussion was done to understand the source of decisions and actions, which translated as ‘awareness’ leading to ‘control’, then ‘perfection’ and ‘perseverance’. The teachers were asked to make a decision based on this discussion and to start working for whatever their aim, considering just two things which they can change or add to make their life situations better. The plan to reach the respective goals was depicted in the form of art work, using colours and symbols on a piece of paper. The fire element was introduced through a candle activity. The participants observed, felt and touched the flame of the candle mounted on a plate. They then placed it on different parts of body, walked with it and exchange them with others. This was done to connect with and understand the energy and nature of fire and also to bring about inner stillness in oneself.

After a break, the teachers were again split into two groups. One of the groups watched a Japanese video, titled ‘Children Full of Life’. The other group took part in a communication exercise where they were asked essential questions related to the School, which led to the discovery of areas or aspects that need to be worked on as a team. 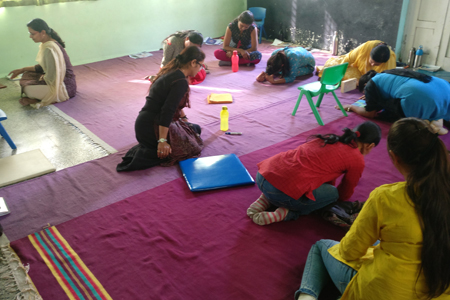 On the last day, different ways of effective and efficient communication were discussed along with their practical applications.

The workshop concluded with a reflection upon the feelings and any change in the same as observed in the beginning.

—Report by Nisreen H., participant of the Workshop, Neevam—The School