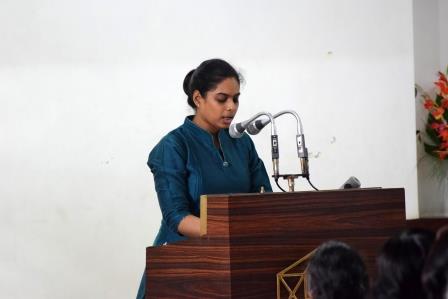 Subramania Bharati’s 137th birth anniversary on 11 December 2018, was marked with readings of his poems in Tamil and English by Puducherry-based poet Palanisamy Sundararasu and recitation of Sri Aurobindo’s poems both in English and French by Rathirekha Paranthamam and Divyanshi Chugh at the Society Hall of Sri Aurobindo Society in Puducherry. 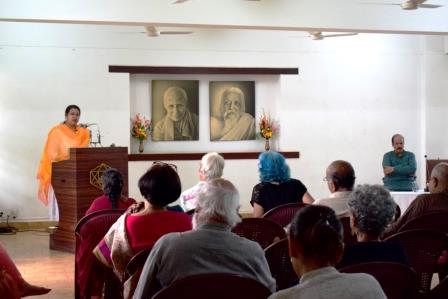 Arjita Chowdhury, an ex-student of the Ashram, sang slokas, devotional songs, and Rabindrasangeet.

Dr. Sehdev Kumar, Professor Emeritus of Environmental Studies at the University of Waterloo, Canada, sang and read Kabir’s do has translated by him. Meanwhile, Sunaina Madeen, co-founder of PondyCan and People for Pondicherry Heritage also read from her father, a well-known surgeon, Dr. Dinakar D Palande’s book which was published recently. Dr. Palande met the Mother in 1968 and has been connected with Her and Sri Aurobindo from then on and has been living in Pondicherry since 1989. 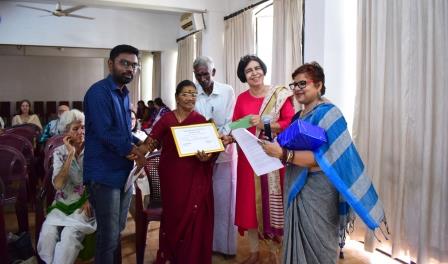 The day’s highlight was the presentation of the Pondicherry Poets Award to well-known poet Jothi Muninathan from Pillayarkuppam village in Puducherry, who is also a patient of SANJEEVAN. Jothi read one of her poems in Tamil before receiving the award. Leo John gave a brief introduction to the extensive work done by SANJEEVAN, an initiative of Sri Aurobindo Society in collaboration with the Institute of Palliative Medicine (IPM), Kozhikode, Kerala, and HelpAge India, New Delhi.

The event “Peace at the Crossroads” was part of the ongoing Pondicherry Poetry Festival 2018 held from 9 to 11, 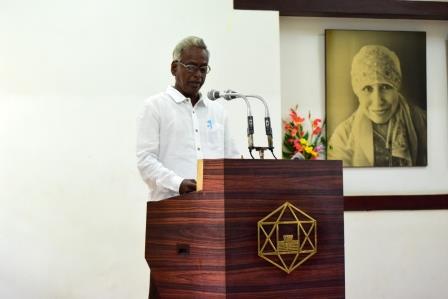 2018, during which a large number of poetry lovers in Pondicherry and Auroville turned up to listen to the excellent work of more than 20 poets from Mumbai, Chennai, Ontario (Canada), Pune, Eugene (Oregon, USA) and Auroville and Puducherry, of course.

Presented by Pondicherry Poets & Brown Critique from 9 to 11 December 2018, the “Peace & Poetry” festival was launched in the stunningly beautiful and dramatic ambiance of Adishakti Theatre in Auroville. The poets who participated from all across India and abroad began their reading following the introductory discussion and the traditional lighting of the lamp.

Apart from exciting workshops on mask-making and Haiku held at AURA Shoppe, seven poets launched their books at Palais de Mahé in association with the ‘People for Pondicherry Heritage’.

Another highlight of the Fest was the support extended by Lieutenant Governor of Puducherry, Kiran Bedi, who attended the books launch event at Palais de Mahé interacting with the Festival poets and organizers. She remembered with great fondness how, when she was still in college, she had written several poems. She also shared her love for photography and nature with the audience and wished the poets all the success. 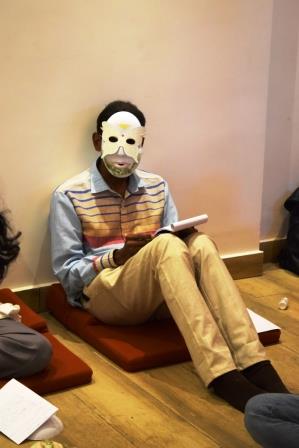 Festival organizers and curators, poets and writers Anju Makhija from Mumbai and Gayatri Majumdar who is now based out of Puducherry and is a part of Sri Aurobindo Society, were delighted with what the Festival was able to accomplish and its reach and thanked the people of Pondicherry, Auroville, Festival partners, especially Nimmy and Vinay Kumar of Adishakti Theatre, Kakoli and Sunaina Madeen of PPH and staff of Palais de Mahé, Sri Aurobindo Society and AURA Shoppe and the handful of dedicated volunteers who ensured the seamless running of the events. Gayatri also pointed out at the inclusive nature of the Festival which aimed at not only at bringing artists from all backgrounds together but also becoming a confluence of the various arts. Both poets hoped to hold more such Festivals in the future.