All’s miracle here and can by miracle change. 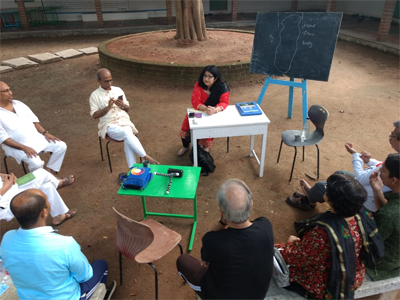 The natural and serene ambience of the open-air, under-the-tree setting at Udavi School, Auroville provided the relaxed backdrop for an almost 3-hour-long session, divided into two smaller sessions with a tea break in between. Beloo organized her presentation in an interactive format with a brief introduction of the topic as she interpreted it, and then encouraging the participants to share their thoughts and insights on some of the questions she raised for discussion. 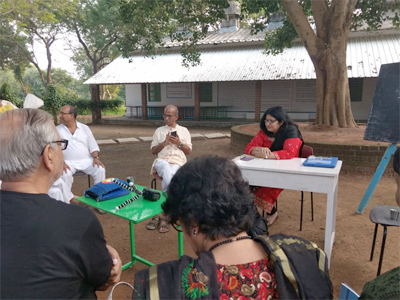 Beloo began by listing five key questions as a way to narrow down and address the rather broad and general topic. The participants were highly interactive and shared several insightful points based on their personal observations and reflections as well as prior reading of Sri Aurobindo’s works and that of other prominent writers such as Rabindranath Tagore, Bankim Chandra and Swami Vivekananda.

Beloo emphasized the following key ideas as she brought together and synthesized several of the points brought up by the participants:

1. What is India? What is the soul or essence of India?

4. Indian Culture in the 21st Century – how can Sri Aurobindo guide us today?

(Some vigorous discussions took place when this question was brought up as some contemporary situations facing Indian polity and society were discussed as examples. The point about how as a nation we have ignored the insights from Sri Aurobindo’s deep social-political thought was highlighted. Also, the necessity to encourage a diversity of viewpoints and at the same time the need to integrate or synthesise the diversity in a deeper unity was emphasized if we are to seriously address the complex problems we face in contemporary India).

5. What should be my work as an Indian?

The following points about the significance of individual effort and sincerity were emphasized:

Overall, the talk was very well received, and particularly the interactive nature of the session was much appreciated by the participants.