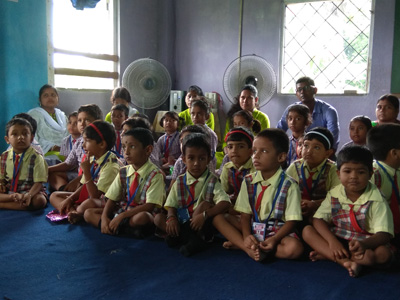 Apart from the regular classes that were going on from October 1 to 5, 2018, at Sri Aurobindo Siksha Kendra, Bishnupur in West Bengal, students took part in drama rehearsals for the school’s Annual Day. In class, special emphasis was given on the implementation of Integral Education; for instance, children did their sums using pebbles. In E.V.S class they were taken out and had to identify trees by touching with blind folds on their eyes.

Meanwhile from October 9 to 12, 2018, in the lower classes, students formed small words with plastic alphabets. It helped them to learn how to spell quickly. And they engaged in a lot of physical activities in game, P.T. and Yoga classes. In Vital class, audiovisuals of the lives of Bhagat Singh, Swami Vivekananda, Sri Aurobindo and the Mother were shown to the children.

From October 25 to 31 special emphasis was given on conversation during class. Personal care of was taken of each student. In the French class, they learnt different French songs with gestures.

On October 27, some respectable members of the Rotary Club of Calcutta visited the school. They were very impressed by the activities of our school. Students performed French song for them; they assured all help for the future development of Sri Aurobindo Siksha Kendra.