Ask Ranjeet Thakur about how a water fountain or a mixer grinder works and his eyes sparkle with joy as he explains the whole procedure without pausing for a bit. The excitement in his voice indicates how much he loves making science-based models and how deep is his understanding of mechanics and motors and other things scientific. Thakur’s little fingers work amazingly fast when he joins the lower half of the bottle, two caps and wires to make a water fountain as his teachers watch in bewilderment the skills this 13-year-old boy possesses.

This is an extraordinary achievement for any child Thakur’s age, but doubly so for him, as he suffers from a kind of neurodevelopmental disorder (NDD) and has difficulty in understanding the basic concepts in class. But when it comes to technology, he showcases exemplary knowledge far exceeding his age-specific skills about the whole technique used in making an appliance.

Thakur was identified as having NDD when his teacher Ms. Sandhya Shukla attended the Project Inclusion (a part of RUPANTAR) orientation in August 2018. 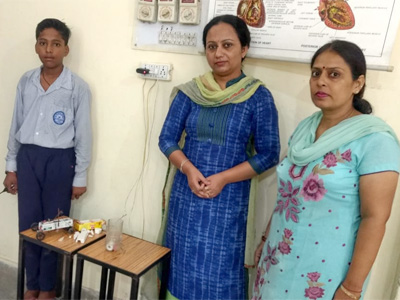 Project Inclusion educates regular school teachers to identify hidden learning disabilities in students by using simple checklists and then enables them to practice an empathetic and sensitive approach towards these children. The programme has a deep-rooted approach and addresses the core issues for helping children with hidden disabilities by sensitizing and empowering teachers, reducing dependence on special educators and resource teachers, and increasing awareness and positive mindset towards mental health issues.

“I do not take ideas from anyone or anywhere. They come to me automatically. I like making different things which involve batteries, motors and wires. I do not like studying,” Thakur said. The usually active and bubbly boy cannot read or write English and can somewhat understand Maths. He became the centre of attention in his Government Model High School in Mauli Jagran district of Chandigarh when he made the model of a car during a class project in August 2018. “It was easy for me. I collected old batteries, old toys and wires and made it. I have also made a water cooler and mixer for my mother at home,” he said, exhibiting a sense of satisfaction for his work. In pure innocence, Thakur claims that he dreams about making these machines in his sleep.

The Project Inclusion trainers conduct four-day orientation programme where teachers are given information about the types of NDD disorders for the initial two days and then they are asked to identify any such case in their class as per the checklist provided to them during the training. On the last day, teachers are given the knowledge and provided simple training to deal with the identified children till the time they are not assessed by clinical psychologists. Thereafter, special educators/psychologists help teachers along with the parents and siblings of these children to practice the techniques to support the child’s learning inside and outside the school. It also helps in improving retention and quality of life of children suffering from NDD.

A total of 276 government school teachers attended the May–August 2018 training that was held in 9 batches in Chandigarh.

“During the training, I got to know about the different kinds of hidden learning disabilities. Ranjeet’s case was in my mind, and I could relate his behavioural pattern with those being told during the programme,” Ms Shukla, Ranjeet’s teacher exclaims. She realized that Thakur has extraordinary IQ level but lagged behind in class due to his inability to read and write. Talking about the school project of making a car, Ms. Shukla said that the competition was to make a working or a non-working model and “I did not expect that he would make a working model with so much precision. I was totally amazed by his expertise on the subject.”

Children suffering with NDD generally go undiagnosed, as their behaviour is normally seen as abusive, aggressive, naughty, inattentive or reclusive. Due to these traits, they are mostly avoided by their classmates and teachers, as a result of which they develop low confidence and prefer to remain in their shell. The situation gets worse when even parents of such children are not able to understand their problem and do not make the effort to know the actual reason behind their condition. Things were not different for Thakur as his family has always thought of him being disinterested in studies.

“He is not utilizing his mind in studies. He spends all the time collecting waste material from home, outside and even garbage to make all these things. I would be happy if he starts studying,” reveals Jaiprakash Thakur, the boy’s father, a barber by profession, who hopes that his son is successful in life and not end up in a lowly profession like him.

Ms. Sunandini Bhardwaj, Project Inclusion trainer, who forwarded Thakur’s case for assessment, realized that the boy may be suffering from a neurological condition, which led to his learning disability. Explaining further, she says that such children with learning disability may have normal intellect but the only problem is in their neural connectivity. This condition interferes with their basic skills such as reading, writing, organizing, time management, abstract reasoning, long or short-term memory and attention.

Talking about the boy’s dreams about machines, Ms. Bhardwaj believes that Ranjeet seems to be experiencing one of the stages of creative thinking called ‘illumination’. “This is a stage in which the person does not directly think about the problem but subconsciously works upon the solution by making connections between ideas and concepts. Once he dreams about the solution, he moves on to next stage of creative thinking called ‘verification’ in which he executes the solution he has dreamt about,” she explains.

With Thakur being identified and his case taken up for assessment, his teachers and parents will be trained by Project Inclusion experts on how to support him and fulfil his dreams.