News from Centres and Branches in September 2018 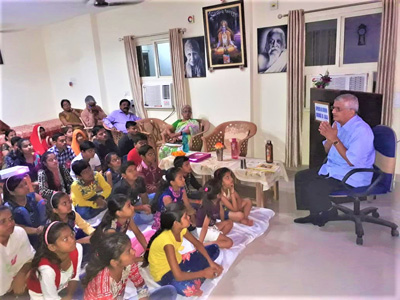 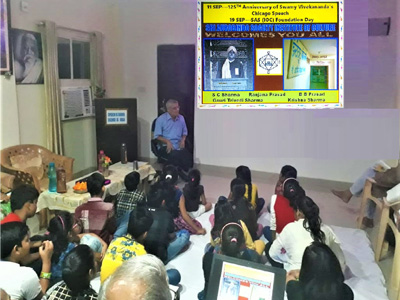 During the dual celebrations, another programme was announced. In an all-India competition, the famous Gita Press, Gorakhpur, is conducting city- and state-level examinations on the knowledge of the Ramayana and the Bhagavad Gita in various categories in the months of November 2018 and January 2019 respectively. In this competition, about 210 students from Gwalior Centre of the Gita–Ramayan Pariksha Kendra, organized by SAS Gwalior Branch, are participating. Shri I. P. Sharma addressed the students and highlighted in detail the examination process and syllabus.

Dr. Suresh Chandra Sharma, with the help of a PowerPoint Presentation, explained the significance of Foundation Day and the importance of Indian Culture for the future of India and the world. Swami Vivekananda’s contribution to Indian spirituality and nationalism was also commemorated on the occasion of 125th anniversary of his world famous speech at Chicago in the United States that he delivered on September 11, 1893. A short video of Vivekananda’s speech in his original voice was played on the screen.

Shri R. C. Das, a member of SAS Gwalior Branch, addressed the guests, especially the students, to explain the importance of self-discipline and values in the life and how to develop it them. 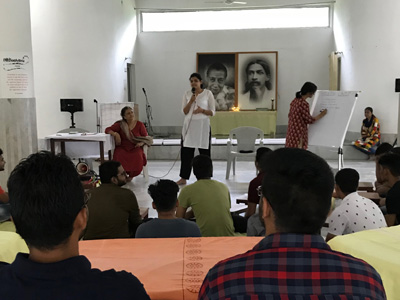 About 45 students, members and guests attended the programme. At the end of the celebrations, prasad was distributed to all.

A youth camp was organized at Aurovalley, Raiwala and Khaitan House, Haridwar, for the introduction to the teachings of Sri Aurobindo and the Mother and the practical application of their Integral Yoga to young college students from September 22 to 24, 2018.

A total of 35 students from Delhi, Ambala, Patiala and other nearby towns participated in the camp. The focus of the camp was to take the youth for ‘a journey within’. 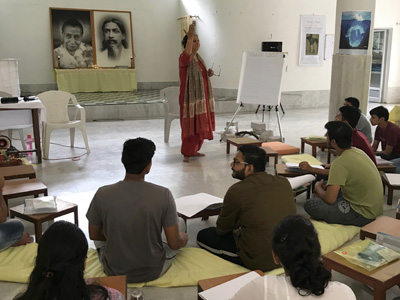 The topics of the camp included an introduction to Sri Aurobindo and the Mother; Sri Aurobindo Ashram at Puducherry; and Sri Aurobindo Society, its centres and branches and various activities connected with them. One of the facilitators took a session on the ‘Planes and Parts of the Being’. The next session was on ‘Qualities and Values in the Light of Sri Aurobindo and the Mother’. The participants were introduced to ‘Yoga and the Benefits of Asanas and Pranayama’. To inculcate the scope of national pride in the youth a session was conducted on the ‘Social and Political Thought in the Words of Sri Aurobindo’. Finally, a session on the ‘Introduction to Integral Yoga and Its Application’ was organized to leave a lasting impact on the participants.

An excursion trip was also arranged which gave the students an opportunity to unwind and bond with each other. What is encouraging is that the all the participants were extremely enthused and eager to participate in more such camps and continue the process of learning to better citizens and humans.