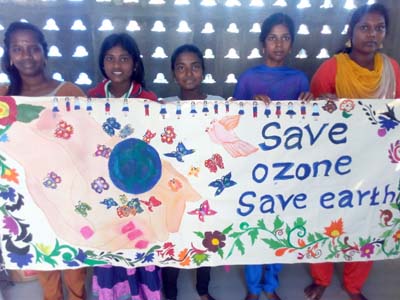 Sri Aurobindo Rural & Village Action & Movement (SARVAM, an initiative of Sri Aurobindo Society) has been conducting English Access Microscholarship Programme since 2013, through which the students in the village learn English language through varied activities and mediums. This Program is being conducted in association with US Consulate, Regional English Language Office (RELO) and FHI 360 for the village students. As a part of the Access Program, nearly 450 village students have learned spoken and written English fluently. September 16 was designated by the United Nations General Assembly as the International Day for the Preservation of the Ozone Layer. To observe this day, on September 16, 2018, 70 students currently undergoing English classes under the English Access Program created posters and wrote slogans, highlighting the importance of keeping our environment pollution-free.

The English trainers at SARVAM first held a theory class to explain to the students the significance of the day. The Ozone Layer, which surrounds the earth at a height of about 25 km, protects life on earth by absorbing some of the radiation from the sun, thus preventing harmful ultraviolet (UV) rays from reaching the earth’s surface. The increase in UV rays has been linked to increase in some types of skin cancers, cataracts, lower plant productivity and deterioration in certain forms of marine life. They explained that Ozone Depleting Substances are some man-made chemicals, which have a high potential to diminish the Ozone Layer. 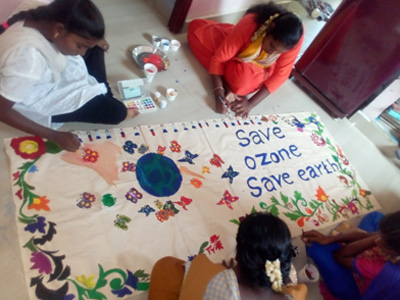 With this information, the trainers emphasized to the students the need to make our environment safe and asked them to conceptualize and then create exceptional, attractively designed posters to mark the significance of the day. The ideation and poster-making were all carried out in groups.

This additional enhancement activity helped the students practice their English as well as enhanced their general and environmental science knowledge.