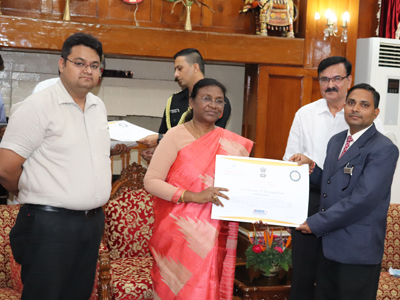 On August 27, 2018, the Governor of Jharkhand, Draupadi Murmu, felicitated 31 government school teachers for introducing innovative teaching-learning methods to improve the quality of education in the state at the Governor’s House in Ranch, Jharkhand.

The teachers received certificates and shawls in recognition of their efforts that were brought to light by Sri Aurobindo Society through its Zero Investment Innovations for Education Initiatives (ZIIEI) programme across the state. 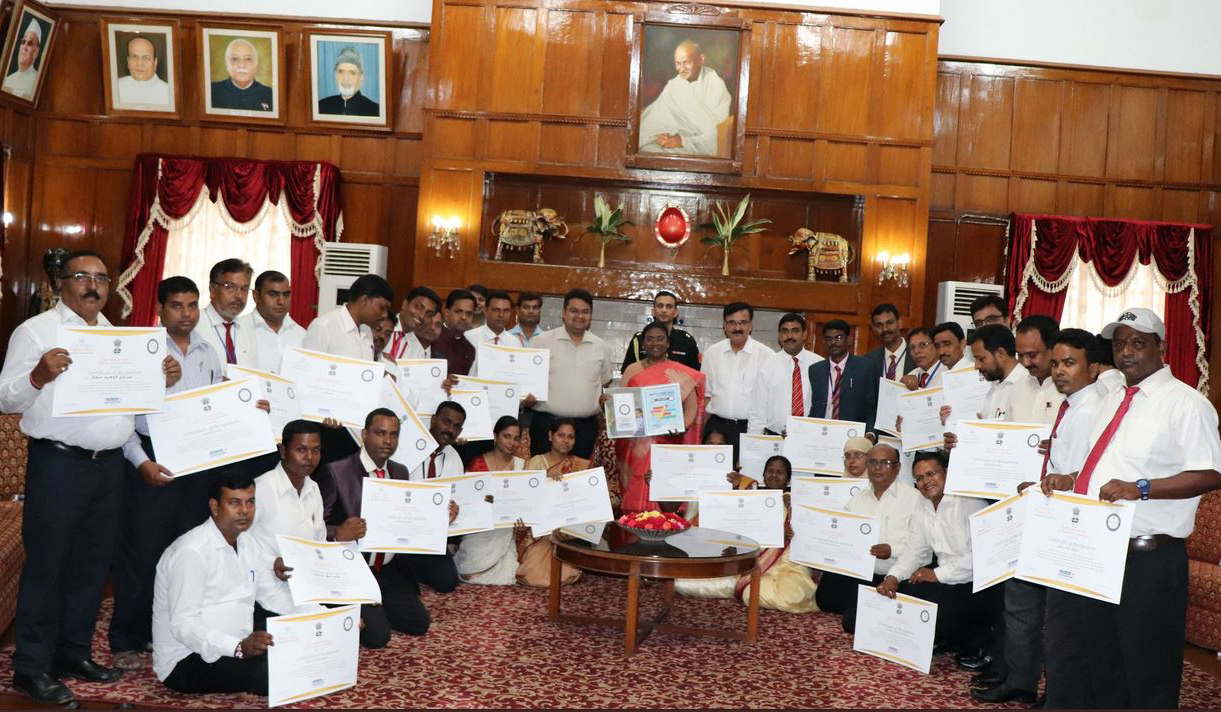 “ZIIEI is a movement with a very progressive vision. Teachers are the leaders and they will have to take the lead to make education reach each and everyone in the state,” the Governor said.

She said that education even today has not reached everyone due to financial and social challenges, and these teachers can help spread knowledge to those who are not fortunate enough to send their children to school. “Education should not only be dependent upon [exam results] percentage but it should also lead to the all-round development of children. Teachers are the nation builders. They instil values in children and make them responsible human beings,” she added. 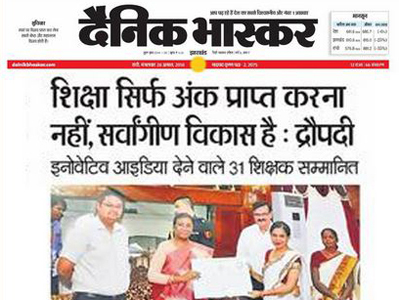 Through ZIIEI orientation sessions since 2017, the teachers are being introduced to the concept of zero-investment solutions, and are encouraged to share their innovative idea to solve key education issues, such as learning outcomes, student attendance and community participation. They are also encouraged to adopt zero-investment ideas of their counterparts from other states. 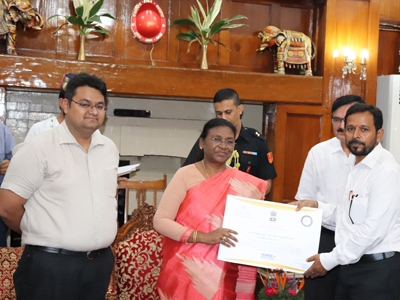 “I had never thought that a simple idea that I have been using in my class would be recognized at such a level. It is the first time that teachers are being honoured for their skills, otherwise this kind of recognition was very rare for the teaching fraternity,” said Shib Shankar Polai, a teacher at the Upgraded Middle School, Khejuria in East Singhbhum district.

Polai was honoured for his innovation to check absenteeism in his school by appreciating the parents whose wards attend the school regularly. This way parents start taking interest in their children’s education and encourage them to attend school regularly, improving their academic results. 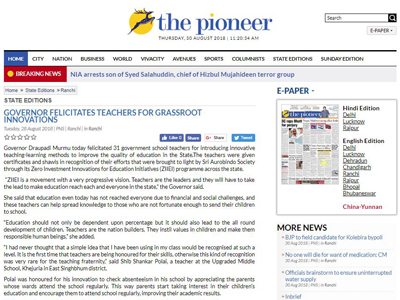 Echoing the same views, teacher Ravindra Prasad Rai of Government Middle School of Hathigarh block in Sahebganj district, said that the face of education could drastically change in the state if initiatives like ZIIEI are promoted in the state.

“ZIIEI has given a platform to the teachers where they can showcase their skills and creativity. It was the need of the hour. Now, the government school teachers are sharing and adopting innovative ideas to give a new direction to education, which has a more powerful and positive impact on the development of children,” he said after receiving the honour from the governor.

Rai has introduced the idea of a complaint box in his school, where students are encouraged to report good or bad incidents happening around them inside or outside the school by writing them on a piece of paper and dropping them in the box. The teacher and the school authorities then take action accordingly. Through this method, students become aware of their surroundings and try to find context-relevant solutions to problems affecting the quality of education. Children also gradually develop a sense of responsibility.

The ZIIEI booklet Navachar Pustika, containing the education best practices by these 31 teachers, was also released by the Sri Aurobindo Society, launched by Jharkhand Chief Minister Raghubar Das in Ranchi earlier this month.

The methods explained in the book can be replicated by any school across the country for targeted improvements in education. To mention a few, these include, fostering human values in students by rewarding them for doing noble work in and outside the school, reducing communication gap between children and teachers by focusing on the former’s local dialects, and activities to engage the community in school.

The ideas were submitted by teachers during ZIIEI orientation sessions in the state in 2017. Nearly 12,000 teachers shared grassroots innovations that they have been using, which underwent a screening and selection process to identify the most effective ones for featuring in the Navachar Pustika.