It has been said that the Vedas are the root of all Dharma, all Knowledge, and Infinite! It has been said that the concept of ‘Sat’, ‘Chit’, ‘Ananda’ (Truth, Consciousness, Bliss) is rooted in the Veda. And yet there still remains a wide gap in our understanding of what the Vedas were meant to convey. In his book The Secret of the Veda, Sri Aurobindo has enabled us to look upon the Veda not as a ritualistic text, but as one that through its deep, thriving symbolism holds within it the source of all knowledge. The psychological and philological analysis of Sri Aurobindo has indeed opened up a radical way of approaching the study of the Veda, and it is in light of this approach that an intensive study camp was held from August 6 to 10, 2018, at the Sri Aurobindo Society, Puducherry. The study camp was organized by Sri Aurobindo Foundation of Indian Culture (SAFIC) and was facilitated by its Director, Dr. Sampadananda Mishra. 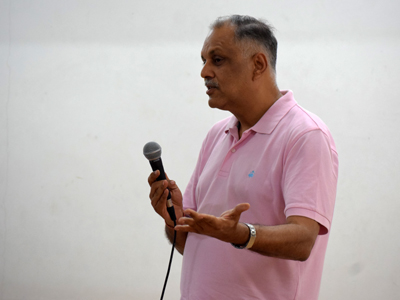 The five-day study camp began with a general introduction of what the Vedas are, the different names that also refer to these scriptures and a brief introduction to the various Vedic literature. This laid the foundation for future sessions where the participants plunged into greater detail regarding the four different Vedas—the Brahmanas, Aranyakas, Upanishads, the six Vedangas and Upa Vedas. A special session was dedicated to enlightening the participants on the various commentaries that have been written on the Vedas, and how these commentaries were so wide ranged and differing in their approach – from the ritualistic interpretation of the Brahmanas to the interpretation of Sayanacharya, from the historical interpretation to the scientific interpretation of the Vedas by some modern Indian scholars, and the attempt by Western scholars to interpret the Vedas based on the Brahmanical texts. 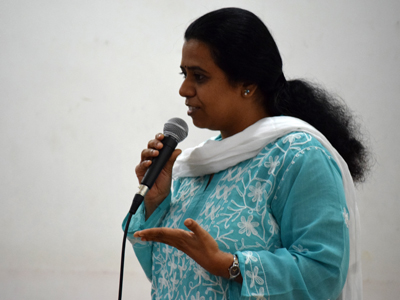 As the days passed, various topics were covered that highlighted the significance of the Vedas. The ‘Vision of the Vedic Rishis’ was a session dedicated to enabling the participants to understand the Vedic system of sacrifice, the Vedic idea of cosmology (the seven principles of existence) and the social ideal prevalent during the Vedic age (the spiritual significance of the fourfold personality of Human).

‘Mantras, the language of the Rishis’ was another point of focus in this study camp. Dr. Mishra began the session with querying what the word ‘Mantra’ meant to the participants, and after receiving many answers he went on to speak of how Mantras enable the mind to get connected to Pure Sound. The difference between Mantra, Tantra and Yantra was also mentioned. In continuation with this topic, the participants were introduced to the first hymn of the Rig Veda, and chanted it collectively towards the end of the session. The Rishis, the seers of the Mantras, were introduced as the 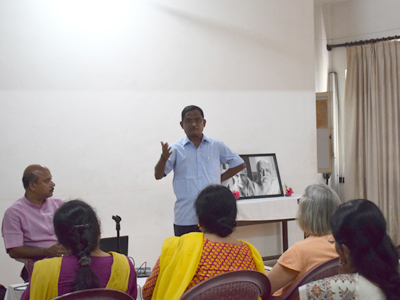 ‘mantrakrit’, the ‘mantradrashta’, the ‘mantrashrota’. Dr. Mishra explained the meaning of the word ‘Rishi’ in this session by going deeper into the system of root sounds and seed sounds. Also were introduced the various categories of Rishis, and a special focus was given to the famous Rishikas of the Rig Veda. The session on Vedic meters (Chandas) was yet another fascinating topic of study, considering Dr. Mishra’s in-depth research on the Chandas over the past years. Being a subject that is mildly touched upon in many academic institutions, this session explored in a greater detail the meaning and significance of Chandas, the various aspects of the Sanskrit meters, and the differences that lies between Vedic and Classical meters. A few topics were spread over multiple sessions in the duration of the study camp. These included the ‘Key Words of the Vedas’, an extremely important session that helped the participants to go behind the symbolism presented in the verses in order to understand the profound, psychological connotations of some keywords recurring in many verses of the Rig Veda. It was during these sessions that a great deal of attention was paid to the root sounds and seed sounds of the words so as to discover their meaning.

An important session was on the ‘Language of the Vedas’, in which Dr Mishra explained the participants about the uniqueness of the language of the Vedas and the difference between Vedic and Classical Sanskrit. A word ‘ashva’ that seemed to mean ‘horse’ in classical Sanskrit stands for much more than a physical horse. It refers to, in a psychological sense, to the ‘great dynamic force of life’, ‘speed’, 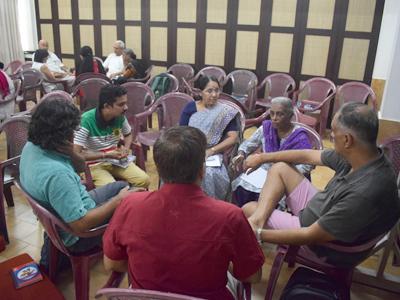 ‘sharpness’, ‘strength’. Such was the case encountered with many of the other significant words in the Rig Veda. Two sessions were dedicated to ‘Vedic Deities’. In understanding that these Vedic deities represented different forms and personalities of the One Godhead and that are there to help Humans in their evolutionary journey, the participants got a further understanding of the ‘living realities’ of the Veda. This topic was succeeded by two legends that are implicitly mentioned in the Rig Veda, one being the legend of how the Angirasa Rishis sought the help of Indra to seek out the lost cows that were being hidden by the Panis. Each character in this legend symbolizes something greater than what is presented peripherally, and the specific sessions of the study camp dedicated to ‘Vedic Legends’ helped to discuss about this. Towards the end of the study camp, the participants collectively chanted some of the mantras carefully selected by Dr. Mishra from the Vedas, and ended the session with the last hymn of the Rig Veda. 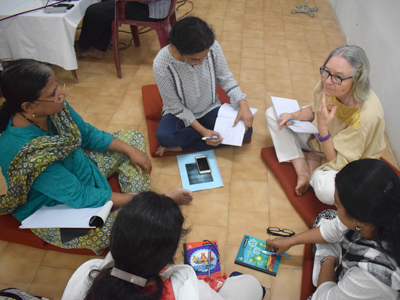 Interspersed with these intense sessions of study were also two sessions dedicated to group discussion and personal reflection on what the Vedas mean to each of the participants. Many participants spoke of how the study camp opened their minds to the vastness of what the Vedic philosophy reflects, and mentioned that they were extremely glad to have attended the workshop.

The concluding session on the fifth day of the study camp was a session of feedback by the participants and that of distribution of the group photographs to each one as a parting token of remembrance.