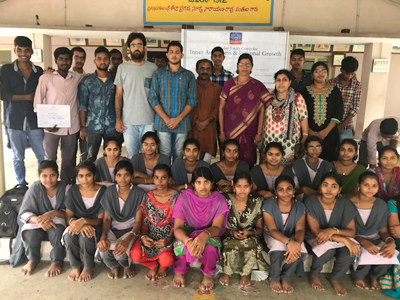 A one-day Youth Camp was organized on July 3, 2018, at SVJV Sanskrit College, Kovvur, Andhra Pradesh, in which nearly 45 youth, both boys and girls, participated.

The programme was inaugurated by the Principal Dr. C Rama Devi, as she addressed the students with a brief introduction of Sri Aurobindo Society, Kovvur Centre. She highlighted the importance of that this camp, based on ‘Values for Success’, and encouraged the students and the faculty to give their full attention and participation to this camp. 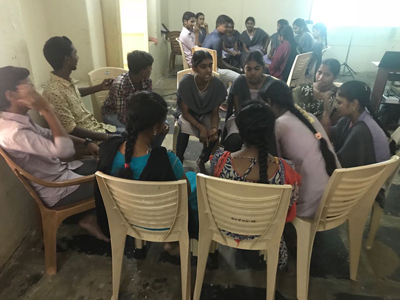 The first session was facilitated by G. Uday Kanth, and he commenced it with a loud chant of ‘Vande Mataram’, which raised the spirit of the students. He gave the participants an ‘Introduction’ and the history and aspiration behind SAS youth camps. The next session—‘Aim of Life’—was led by Nagarjuna. It was a highly interactive period wherein the audience was shown a presentation, followed by some intense question and answers at an individual and collective level as well. He addressed the queries of the students by telling them a short story titled ‘A Diamond Knowing Its Value’. It was a very well-received lesson.

The next session was about ‘Inner Awareness’, by G. Uday Kanth, which he started by giving the participants an activity sheet, asking them to write the traits of a true individual, which left the students thinking. Along with this question, the facilitator also asked them to write a few words on the Physical, Mental & Vital aspects of a being. Thereafter, Uday imparted the ways of learning active ‘meditation’, which made the students feel good. 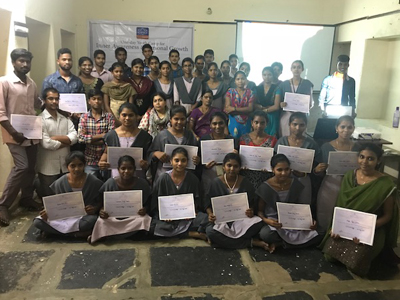 Post lunch, Uday, Nagarjuna, Lalita conducted some more hands-on activities, involving sensory games. The first session was about how quickly our senses work. They also conducted activities on the ways to concentrate and develop consciousness of their surrounding and within. Later, the entire batch was divided into 5 groups for a group activity, which the students enjoyed the most.

In the final session, Uday Kanth gave an Introduction to Sri Aurobindo, the Mother and Sri Aurobindo Society through a presentation.

The workshop concluded with ‘Vote of Thanks’ by Dr. Savitri, Secretary, SAS Kovvur, who urged the students to be a part of local centre and participate in the programmes for their self-development and the progress of the society. All the students were given participation certificates and happy memories of a day well spent.