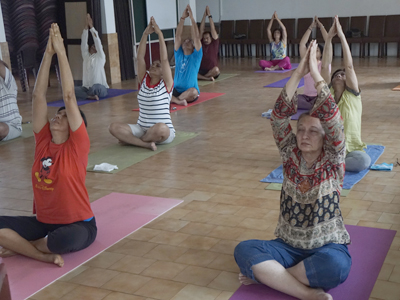 An 11-day-long yoga camp was organized by SAIIIHR for 20 people with lifestyle illnesses from August 20 to 30, 2017, at the Society Hall, Sri Aurobindo Society in Puducherry. Yoga master Dr. Mohanrao Sarpate Guruji conducted the camp which addressed illnesses such as Diabetes Mellitus, Hypertension, Dyslipidemia and Hypothyroid, among others. 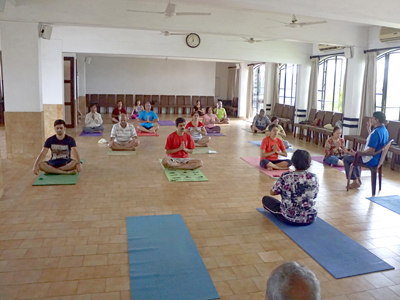 On the first day of the camp, apart from the regular pranayamas and asanas, there was an hour-long counseling by Dr. Uttareshwar Pachegaonkar – Director, Sri Aurobindo Centre for Homeopathy – on diet and regimen. It included extremely beneficial tips on sleeping, daily intake of meals, advice on when not to drink water, amount of exposure to sunlight needed, among others. The first day’s session lasted two hours from 6 a.m. to 8 a.m.

From the second day onwards the camp lasted an hour long from 6 a.m. to 7 a.m. Some of the participants, whose age ranged between 35 and 70, did the Jalaneeti Shudhikriya earlier before the camp commenced at 5.45 a.m. On the eight day of the camp on August 27, six people opted for the Shankha Prakshalankriya, which proved to be additionally helpful. 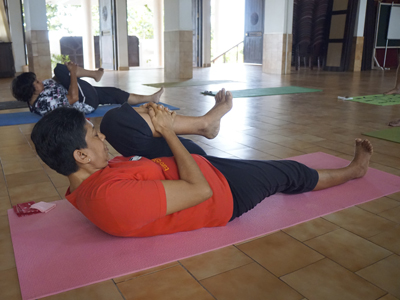 “The yoga camp was well organized, thanks to Guruji, Dr. Pachegaonkar, Mr. Mangal, the Society team and the participants. I would like to thank the Society for giving me this opportunity to attend and benefit from the camp.  I benefitted from the camp in the following ways: Becoming more health conscious, conscientious and feeling more energetic.”
– SM age 55

“Following the yoga camp, we feel fresh and more energetic during the day and the body is more flexible and supple. Besides becoming calm and peaceful, the main benefit is that our breathing has improved. There has been body cleansing along with the mind. We suggest that the camp is held at least twice a year. And we would like to go for more advanced and intense sessions.”
– PD (54), CD (53) and RD (25)