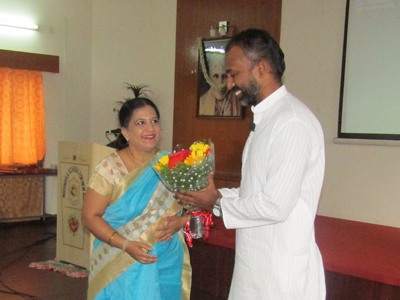 Photo Album of the Workshop on FB

Shivakumar, Director, India Council for Integral Education, conducted an intensive two-day workshop on Integral Education for teachers of Mirambika School for New Age (MSFNA), Bengaluru. Around 45 teachers from Pre-Nursery to Class X, along with the Principal of the School, Sharadamba C R, participated in the workshop. This was part of our efforts to bring in more of Integral Education in all our AuroSchools across the country.

On the first day, the workshop opened with a session on re-looking at what is taught in the name of education. Except for a few subjects like languages, it was noted that in general those who follow mainstream education, end up not using nearly 90% the content of most of subjects in their life, and even the subjects relevant to a child could be taught in a better, more child-centred way. 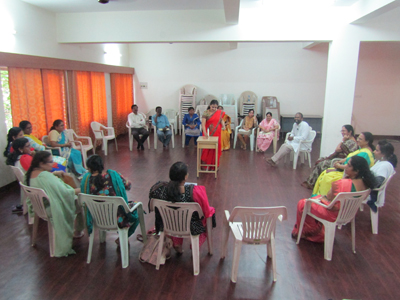 The next session involved a discussion on what we mean by child-centred education – the possible topics covered? The processes involved? And, more importantly, how can teachers be facilitators of this method of teaching? Shivakumar emphasised the fact that whatever we want to inculcate in children, the first rule is to educate ourselves, the teachers. To live by example is the most effective way of teaching–learning.

In the afternoon, there were exclusive sessions for Nursery, KG and Primary teachers on the most important aspect of education: development of the senses. Through games and activities, the sense of hearing was taken up and the principles of sense-development was introduced. 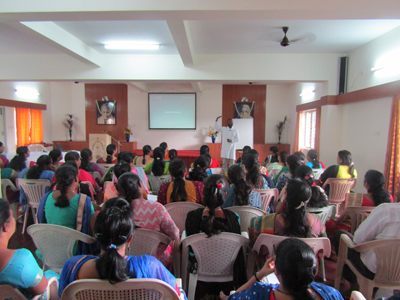 The second day started with an experiential understanding of the core components of Integral Education; the understanding of an individual at the level of the physical, emotional and mental bodies, with a fourth body, the Psychic, at the core of our personality. This was followed by a deeper understanding of Values and the need to inculcate them in ourselves so that it could be introduced in classrooms too.

The afternoon started with an activity to discover one’s rhythm. This was followed by an intensive experiential session on looking for the Source of our happiness! Through this activity, the teachers were led to discover that the source all happiness is within one’s self – and external factors only being triggers. The workshop concluded with an exercise for awakening the Flame deep within our heart and invoking it to express itself through all our thoughts, emotions, feelings, speech and action. Overall, the two-day workshop resulted in a deeper look at the educational system that we follow, and the importance of Teachers being the learners and facilitators of a new approach to education that is child-centred – an Integral Education.

This was only the beginning of a series of interactions meant to bring in more of Integral Education–based practices into the mainstream education.