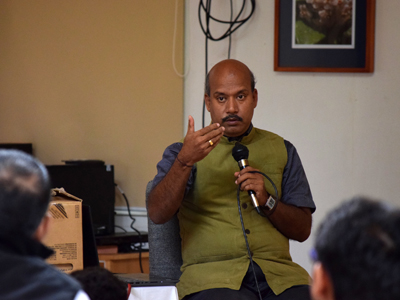 A study camp, titled SAMSKRITI—Indian Scriptures in the Light of Sri Aurobindo, was organized at Madhuban (Sri Aurobindo Ashram—Delhi Branch’s relic centre), Talla Ramgarh, Uttarakhand, by Sri Aurobindo Foundation for Indian Culture (SAFIC), Puducherry. A total of 28 participants from various parts of India and abroad; from as diverse backgrounds such as army, medical, educational, corporate, etc.; and of all ages participated in this camp. After the arrival of the participants, and once they familiarized themselves with the beautiful location, an opening session was held at the campsite. The participants introduced themselves not in the usual way but by sharing about their aspirations in life and how do they perceive to live it. There was a collective meditation after the introduction session. They were then informed of the rules of the campsite and were also given an option for offering Shramdaan (volunteering to take up some works of the center) at the campsite.

The second day began with an early morning session on Mantra Yoga. Mantras were chanted collectively with elaborate meanings explained by Dr. Sampadananda Mishra, Director—SAFIC and facilitator of the workshop. The day entered into discussions on introduction to Indian culture, Yoga, Sanskrit language, etc. The two greatest contributions of India to the world towards the progressive evolution of humanity, Yoga and Samskritam were highlighted and how the system of yoga through scriptures was developed was discussed in detail. 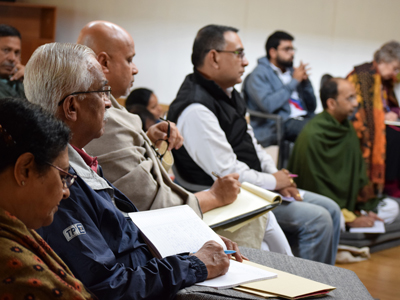 After the session, participants engaged in Shramdaan activities such as vegetable cutting, roti making, sweeping the hall, etc., and others opted for visiting the Tapogiri Ashram which is 1.5 km away from the campsite.

The third day began with a heavy rain which made the collective chanting even more powerful. This day was dedicated for the Vedas. A discussion based on the Hindu scriptures, covering the differences between Shrutis, Smritis, Itihasas, Puranas, etc., took place. The keywords in Vedas along with the different Vedic deities in different branches of the Vedas, such as the Rig Veda, Sama Veda, Yajur Veda, etc., were also discussed. Certain mantras from the Upanishads were chanted and meanings explained during the last session for the day. After the session, some of participants engaged themselves in Shramdaan activities. Collective meditation took place from 7:00 to 7:30 pm with an audio recording on guided meditation by Tara Jauhar.

The fourth day again began with a collective chanting. The day entered into discussions on the Upanishads, its introduction, keywords, stories and contemplation on some verses from the Upanishads. Why do we study Upanishads? In very simple words: for light, insights and guidance for our inner growth. Upanishads are culmination of the Vedic teachings and they prepare us for the Vedas. Upanishads speak of One Bramhan – the Supreme Reality, in contrast to the many gods of the Vedas. They are the scriptures of Brahmavidya: Self-knowledge, World-knowledge and God-knowledge. 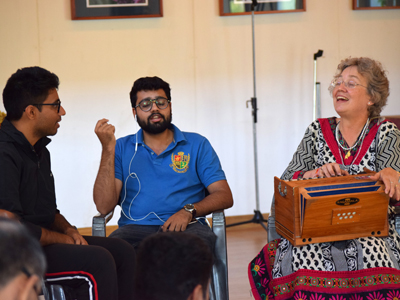 The sessions were interactive and the participants came up with various questions which led to more intense discussions. After the session, the participants went for a short trek into the mountains guided by Subhash bhai from the campsite.

The fifth day began as usual with collective chanting. During the chanting, the Chakra purification mantras, starting from Muladhar Chakra to Sahastrar Chakra, and vice versa was explained in detail. The next session was dedicated for discussions on the introduction to Epic literatures—Ramayana and Mahabharata. Later, there were three rigorous sessions on the Bhagavad Gita, its core teaching, its practical applicability, the importance and relevance of its teachings. Verses from the Gita were also explained and chanted. After the session, one of the participants offered to sing some songs and the others joined. Then there was a collective meditation during which an audio was played which contained readings of prayers from Prayers and Meditation of the Mother. A 50-minute long post-dinner night trek through the jungle was an unforgettable experience for the participants. 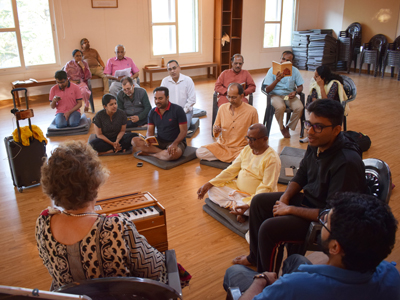 Discussion on the Classical Sanskrit literature after the collective chanting on the sixth day was much inspiring - Classical Sanskrit poets and Subhashitas—The Wise Sayings, the story of Shakuntala – all these created much curiosity among participants. The day was closed with participants sharing their feedback about the workshop. Later, the participants again got engaged in shramdan activities. The Mother’s organ music was played during the collective meditation at 7:30 pm. After dinner, all the participants gathered together for a bonfire.

The entire workshop was successfully completed. The discussions based on Vedas, Upanishads and Bhagavad Gita led to discussions on various other topics too and brought out greater clarity. The concept of focusing more on that Supreme Truth was very clearly brought out through this workshop. The doubts were well clarified by quoting relevant verses from the scriptures and passages from the writings of Sri Aurobindo and the Mother. The overall atmosphere and ambience of the campsite added to the theme of the workshop—‘Indian Scriptures in the Light of Sri Aurobindo’.

“The Camp was excellent. Each and every moment, we were expecting for the session to start and enjoyed each session, as we taste a drop of honey.”— G. Lalitha, Chennai 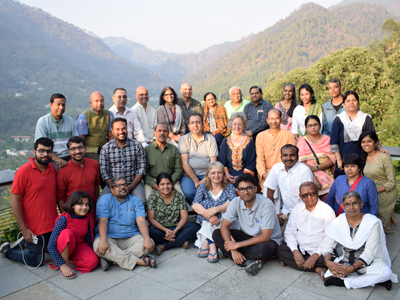 “I liked all the topics and the inspiration it gave to go for a deeper study and how they can help us in our Sadhana is the central theme. His workshop is like a bird’s eye view. Each session’s topic may be spread and blossom into workshop of 6 days duration or a month’s duration to go deep into and actually to assimilate it. May be a course of 3 years, 5 years should be drawn to spread the message of these scriptures.”—G. Vishwanathan, Chennai

“I loved the deeper meaning as derived Dhatu of Sanskrit language. I love the organization of topics – the comprehensive approach.”— Geetanjali Tiwari, USA

“Everything was amazing especially the Bhagavad Gita. It was intense and the way it was told to us is amazing.”—Jidesh Gopalan, Kerala

“Shri Sampadananda Mishra has been brilliant all through his expositions of all Indian Scriptures as well as the philosophy of Sri Aurobindo and the Mother. Fortunately, there was nothing in the workshop that I even least disliked. Everything was beautiful, excellently executed and coordinated. Undoubtedly, it has given us very clear insights of life.”—Harendrakumar Ramteke, Pondicherry

“I like the meaning of Mantras. I learned yoga differently and learnt about Indian Civilization. I liked mantra chanting in the morning. I really like about my teacher how he taught to us through stories.”—Tsering Choden, Uttarakhand