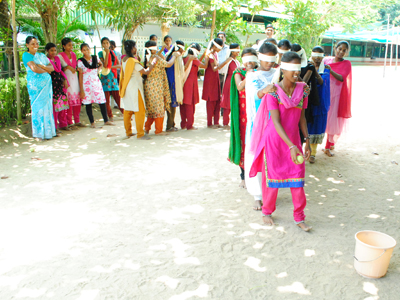 INTRODUCTION
Epitomize Prolific and Integral Competencies (EPIC) is a specially designed course for the age group of intermediate to higher grade candidates learning English. The programme was conducted for 3 days as a Mid-term intensive session of English Access Microscholarship programme at Satyam Campus, Sarvam, Pudhucherry. The training programme was conducted for 130 candidates for three days. LIFE – Literacy Instilled For Eternity is an academy that worked to create a prolific knowledge in English through this programme. Believing this programme would build the quality of lives and create opportunities to attain excellent knowledge for substantive improvements in the state of literacy through various communicative and soft-skills training programmes.

EPIC was conducted with team of four professional trainers from LIFE Academy. These professionals have extensive experience in teaching and training English for more than a decade. The session began with a diagnostic test. A pre-assessment test was conducted to diagnose candidate’s potential or level in English language. The diagnostic test was given to evaluate their ability in communication skills. This diagnostic test questions were framed from the components designed for the intensive training programme – EPIC.

INSIGHT ON EACH TOPIC
Sniffing Snippet: The first session was named ‘Sniffing Snippet’. The objective of this session is to train the students in basic writing skill. The differentiation between vowels and consonants was explained and the comprehension was tested with the maze. A brief explanation of articles was followed with the cloze test. The basic sentence patterns were taught and the same was tested with the sentences. 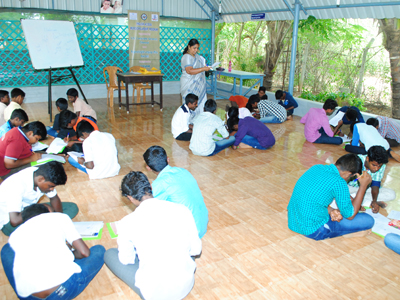 Chat Social: The session title was ‘Chat Social’ and it was designed to introduce language required for media. It also focused on introducing various social media along with different abbreviations, acronyms, etc. The challenge that the students faced was the usage or the identification of the abbreviations that is used in social media.

Grace Grapple: ‘Grace Grapple’ is an activity designed to train candidates to learn new vocabularies through short stories. After reading the short stories, the students were allowed to discuss, narrate and create a story on the similar theme. Such activities helped candidates enjoy reading short stories and get to know more of vocabularies and thereby they gained confidence to converse and develop content on own. 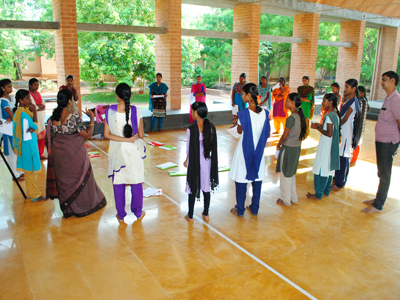 Yak Cuisine: ‘Yak Cuisine’ is an activity that trains the participants with cooking verbs. Before getting into the session, an ice-breaking was provided to introduce the activity and to create an ambience to work as team. This session trained the candidates focus on ‘learning cooking verbs and terms trough cooking’. Supporting this skill, audio-visuals (AV) were given. After watching the AV, the candidates learned how to use different parts of speech especially verbs.

Quest Guess: This activity was designed to train the candidates on how to seek information through open-ended and closed-ended question. This activity was provided with worksheet and an audio-visual (AV). The AV consisted of celebrities’ picture and they were asked to find the celebrity through the open- and closed-ended questions. It is meant to train the students in asking questions. The students participated with zeal and the session was very active.

Diction Demand: The activity was done as ‘Dumb Charades’. One member of the team was asked to pick their lot which had the name of one TV show. He/she enacted and the other members identified the show. Following this they were given a handout which had picture with description of different parts of the body. Another handout was given with the description of the character. Using the handouts all the students were asked to frame five sentences and candidates were called to stand in front of others and tell what they have written.

Sketch to Score: This activity was carefully designed for the candidates to work on their creativity and develop their skills towards, acquiring vocabulary and making connective statement, ideas and reflexive content. Before getting to the activity an ice-breaking session was done, which kindled their interest in learning and helped them overcome their shyness and timidity to come up with presenting their ideas/content before the group. In this session students were trained intensively on the ability to think creatively by providing various activities.

Infer to Infuse: ‘Infer to Infuse’ an activity which was carefully designed for the candidates to analyze and comprehend the text which had a snippet instead of direct narrative. To make the candidates aware that to infer they require concentration and a vivid understanding from their memory, an activity of memory game was given to the entire batch, so it became easy for the batch to take the activity as a life skill.

Recount the Real Count: ‘Re-count the Real Count’ is an activity in which the batch was divided into groups of four. In a group they needed to discuss and share their experience which could be any memorable moment. After the discussion, one after the other they were asked to narrate the other’s experience. The students participated with zeal and the narration was interesting with the creativity of the students. 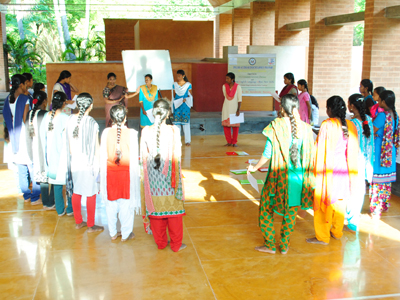 Lead the Lead: The activity for the session was titled ‘Lead the Lead’ in which the participants were asked to create multiple words which helped them forming rhyming words. The candidates were given more vocabulary to form rhythmic note. The easiest and the best way to make the Lead the Lead was to have clear outlook of how important words and the rhythm in it. In this session, slogan writing was also conducted for the learners.

Frame a Fairy Tale: This session was supported with colour worksheets, which interested the candidates and loved to perform the activity provided to them. In the first part of the training the candidates were trained to find answers based on characters of children literature. In the second phase, the candidates were assigned to express their favorite fairytale characters.

Order the Lyrics and Sing Along: ‘Order the Lyrics and Sing Along’ is an activity which was carefully designed to train the candidates with pronunciation and create a zeal for English language. This session was an attempt to create a passion towards English language among the students. The printed lyrical strips were distributed to them and were instructed to arrange them in order after listening to the audio.

As a concluding session of the programme, a post-training assessment was conducted to evaluate the level of acquisition through this mid-term intensive program. The received evaluation from the candidates proved that the training had introduced numerous new language tools for them. The training has enriched their potential and confidence to converse and develop content in English.