Shivakumar, Director of India Council for Integral Education (ICIE), visited Lilavati Lalji Dayal High School and College of Commerce, Mumbai, and conducted sessions for their teachers and the management team on improving the quality of education through a better understanding of children and their true needs. 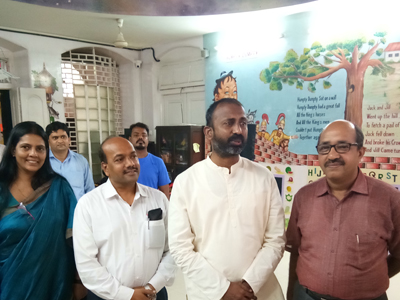 Shri Dhiren Sampat, Trustee of Lilavati Lalji Dayal Amalgamated Trust which runs the School & Junior College, explained in detail the functioning of the school and its facilities offered to children. The objective of the Trust is to provide and support community service, provide education at very low and affordable education through its school and college (current strength approximately 1,200 students) and help the deserving individuals with medical & educational aid.

The school has already sent its Principal Shri Jayaprakash Maurya and a few teachers to Puducherry for the training provided through Integral Education Workshop at Puducherry during the previous years and the visit was meant to re-enforce the measures started as a result of it. There was also an interactive session by Shivakumar with all the teachers of the School and the Junior College on the topic of ‘A Relook at What We Teach Our Children’. A discussion followed on how do we make our teaching more interesting and relevant to children, and also on how do we help other fellow-teachers too so that the entire education process gets transformed into a beautiful process. This was followed by a question and answer session. All the participants felt & expressed that this is a much-needed approach in these times of industrialized education.

WHERE: Marathawada Institute of Technology, Aurangabad 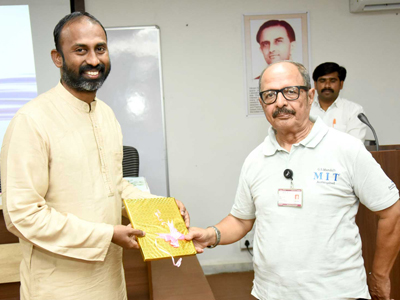 The Director of India Council for Integral Education (ICIE), Shivakumar, visited Marathawada Institute of Technology (MIT), Aurangabad, and organized an interactive session for the students of the Institute on the topic of ‘Discovering Our Hidden Talents’. About 50 students from First-Year Engineering attended the session. Professor Bijlee Deshmukh, Director, MIT Infrastructure and Professor Sunil R Andhale, Head of Department—Basic Science, were present throughout the session. Dr Vrunda Deshpande, Marathi Professor of MIT, introduced Shivakumar and welcomed him.

Shivakumar opened the interaction with the question ‘Where do our talents come from?’ and after an intense interaction, the students arrived at the conclusion that talents are to be found within each one of them and only the help for discovering & developing may come from outside. 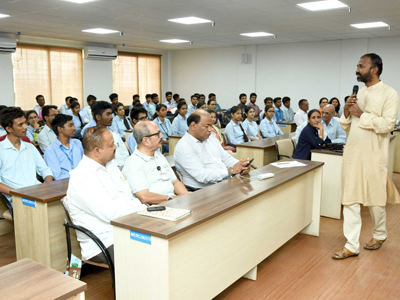 After that the discussion ventured into the question that if talents are hidden within us, how do we look for them and discover them? Shivakumar made them do a little awareness game where each of the students shared how they discovered their talents and developed them.

The students kept asking deep questions throughout the interaction and it was a joy to see the young engineering students applying themselves on a fundamental topic like how to become aware of oneself and be in-charge of one’s life. At the end of the session, one of the students presented a beautiful collage and a giant greeting card made by the students. 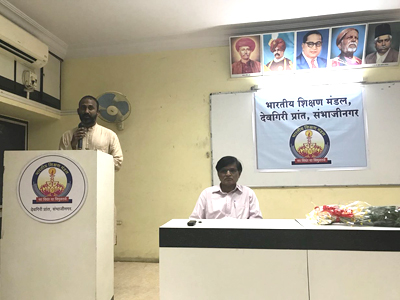 Shivakumar, Director of India Council for Integral Education (ICIE), interacted with the Principals and Headmasters of Bharatiya Shikshan Mandal, Devagiri Prant, Aurangabad, on the topic of ‘What should we teach our children?’ 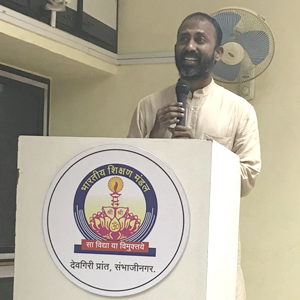 During the second half of his interaction, Shivakumar described about an Integral Education that follows the growth of the child and helps the child in developing his/her various innate capacities and tendencies to their fullness. He advocated a framework of an Integral Education which facilitates a child’s grows through a deep psychological understanding of it. This is a framework where all the good practices available could be synthesized into a beautiful whole for the education of the child.

Towards the end, there were very valid questions asked as to how to bring about such an education for our children. Shivakumar invited all the educationists to come together and start working towards a transition from the conventional system to a child-centred way of education. He emphasised that such a system should be developed by those who are engaged in Education.

Prof. Sarjerao Thombre, Head of the region, Devagiri prant, thanked the speaker and the audience for making this event into a beginning of a deep change in the educational system and promised that Bharatiya Shikshan Mandal will work more vigorously towards accomplishing