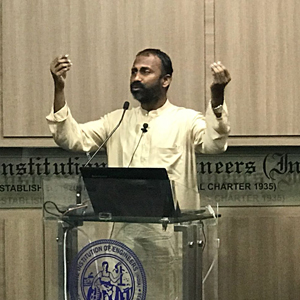 Shivakumar, Director of India Council for Integral Education (ICIE), conducted an interactive programme on ‘Introduction to Integral Education’ for the management representatives of various educational institutes in Nashik on April 17, 2018. The event was organized by Bejon Desai Foundation’s Educators Academy, Nashik, Maharashtra, as part of their educational work to bring about a transformation in the society. Dr Ashwinikumar Bhardwaj, Director of Bejon Desai Foundation, took the lead in planning and coordinating the event.

More than 55 representatives from various educational institutes from in & around Nashik participated in the programme. The Institute of Engineers (India) Nashik, Maharashtra, graciously hosted the event. During his interaction, Shivakumar raised some fundamental questions as to the relevance of the existing syllabus and its origins. Through examples, he showed that a major part of the syllabus is not only ‘not’ useful to children, but they also do not help the child in discovering and bringing out his/her inner potential. On the contrary, they prepare the children for a career offered by the industry and therefore is ‘industry-centred’ and not ‘child-centred’.

During the second half of his interaction, Shivakumar described about an Integral Education that aims to address the Physical, Emotional and Mental aspects of the individual and helps a child to understand herself/himself from within. It focuses on developing the key faculties so that a child grows up with not just information and training, but becomes a total individual who goes into life long journey of evolution and growth.

This was followed by a question-and-answer session, where questions related to a better understanding of such an approach was clarified. All the participants felt and expressed that this is a much-needed approach in these times of industrialized and corporatized education.