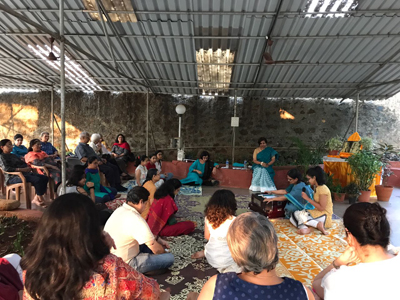 Highlights of the Programme

The sequence flow at the programme was as follows: 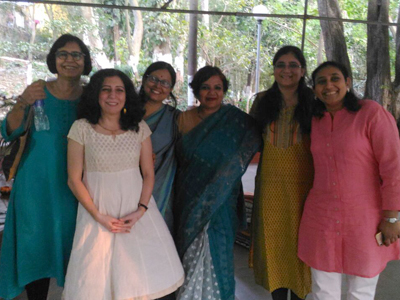 An introductory speech was delivered by Ms Gayatri Majumdar—poet, publisher and author from the Pondicherry Poets. Thereafter, Ms Anahita Sanjana, an educator and ardent devotee from Mumbai, read Sri Aurobindo’s poem Krishna and then a mesmerizing passage from Sri Aurobindo’s magnum opus Savitri: A Legend and a Symbol.

This was followed by chanting of Saraswati Vandana Mantra by Aparna on Ashram’s Sunil-da’s music. Next, the stage was taken over by poet, playwright, translator and columnist, Ms. Anju Makhija who recited Sri Aurobindo’s poems 'Because Thou Art' and then 'Moments'. 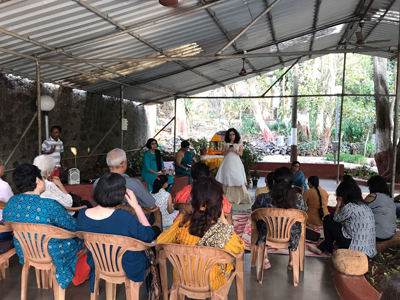 The recitation was followed by another round of Gurudev Tagore’s songs by Aparna, which included ‘Aaj Chandni Raat Hai, Sabhi Chal Diye Van Ko’, ‘Aaju, Sakhi, Muhu Muhu Gahe Pika Kuhu Kuhu’ and ‘Gahana Kusuma Kunja Majhe’. Next was a song on Goddess Lakshmi in Kannada by Ms Shehnaz Pardiwala, a regular member of the Mumbai Branch. Paying homage to the Mother of Sri Aurobindo Ashram, next a few stotras of Maa Mira were chanted.

The programme ended with a vote of thanks by Gayatri with a minute of silence.

Introductory Speech to the Programme

The introductory speech, stringing together the title of the programme and the works of two of the greatest poets of India, is as follows:

Basanta is the festival of spring, welcoming the beginning of the season (vernal equinox). The concept behind Basanta is no different from that of Holi, except for the gracefulness with which it is celebrated.

To celebrate the season, we make our offerings to great souls—Sri Aurobindo and Gurudev Rabindranath Tagore.

Rabindranath and Sri Aurobindo were formally introduced to each other in 1906 in Calcutta.

Of Rabindranath Tagore, Sri Aurobindo wrote these words in the 1930s, ‘TAGORE has been a wayfarer towards the same goal as ours in his own way’ and their full significance can be grasped only when it is understood that the two master-souls were at one in the central purpose of their lives.

Profoundly touched by Sri Aurobindo’s soul-stirring lead to the country, Rabindranath wrote a memorable poem ‘Namaskar’ or ‘Salutations’, addressing Sri Aurobindo, which is still enshrined in the hearts of his country people. Rabindranath himself called on Sri Aurobindo and read out to him his heart’s homage.