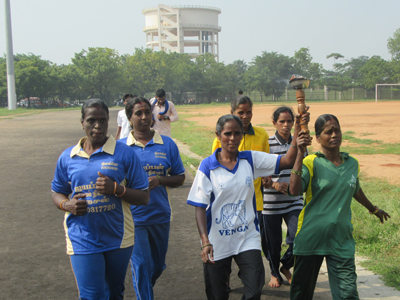 The elderly, widows, abandoned women, terminally ill and other marginalized members are most vulnerable to suffering because of social exclusion and domestic violence. The senior citizens particularly, shunned or abandoned by their families, face the prospect of a lonely life and even death. In such scenarios, apart from providing rehabilitation, counselling, training, financial assistance and health-care activities, SARVAM (the Integral Rural Development Proagramme of Sri Aurobindo Society) extends an almost family presence, with the volunteers and coordinators ensuring constant attention and caring gestures towards such elderly people. In addition, SARVAM coordinators and volunteers organize special events for them to be happy, healthy, cheerful and participative. They are made aware of the need to be supportive to each other without discrimination of caste, race, language, religion and status. Recently, SARVAM organized a multi-sport event for the elderly women belonging to various project villages. This programme took place on December 9, 2017, in Indira Gandhi Sports Stadium from 9 am to 5 pm. More than 100 women between the ages of 40 to 85 participated in many games. The main objective of this programme was to provide an outlet and to bring them joy and dignity of playing in a professional stadium.

Preparation for the Event

Many of these women have neither ever ventured outside their villages nor played any organized sports so far in their life. This opportunity carefully planned and executed by SARVAM helped them to learn and play many sports first within the villages and then finally spend a whole day happily in a sporting arena. The participants were divided in two groups based on their age. The first group had women aged 40 to 55 and in the second group consisted of the age group 56 to 85 years.

All these elderly women were first trained by experts for the past 3 months, keeping in mind their general health conditions. SARVAM with the help of some coaches from various schools prepared these women mentally and physically regularly on all Saturdays and Sundays. These women are poor and most of them have many daily chores in their homes and some even work professionally to earn a living. Even then they meticulously participated in the training every week and actively learnt all the sports that were taught by the trainers. All the sports masters, especially geared for geriatric individuals, taught these women in a gracious, kindly manner and friendly matches were conducted in Satyam campus every week. This helped these elderly women to get acquainted with all the sports activities and rules easily. 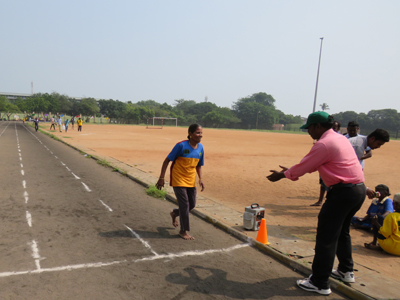 After getting trained, on December 9, all these women were brought in a bus from the villages to Indira Gandhi Sports Stadium, which is one of the best stadiums in Puducherry. Most of the national- and state-level competitions are conducted in this stadium and most local professionals practice and play their sports here. These elderly women, when they saw this stadium, were naturally stunned and once they got over their initial awe were happy and proud to play sports in such a great stadium.

The sports meet commenced and all the women actively participated in the sports event. Based on the age categories, sport chosen and their physical condition, all the women lined up for the various activities, full of enthusiasm and vigour. The most inspiring and beautiful part of the programme was the way in which all the women played with a relentless sporting spirit and encouraged each other, even competitors, during the events. The audience was suitably impressed and touched by the entire event.

Some of the youth playing in other parts of the stadium gathered in the stands to watch the unique competitions. They all admired the spirit of the sportswomen and congratulated and cheered them, inspired by the joy and attitude with which the games were being played.

The trainers themselves were very appreciative of this inimitable sporting event. Most of them have been coaching, training and conducting sports events for many years, but these women’s enthusiasm and fair play left them feeling very humbled and yet proud to be a part of this event.

Throughout the day, all the women participated in as many events as possible, unfatigued, active from morning to evening. It was an occasion unparalled to any previous one in their lives. The chance to play sports in a professional stadium with modern facilities was not something any of them had even dreamt of. A unanimous feedback from the participants was that they will cherish the day forever and expressed their gratitude to SARVAM for providing this wonderful opportunity. They requested SARVAM to organize similar events periodically so that they will be able to get more exposure.

Highlights of the Event

During one of track events, Mrs. V. Padhmini ran very fast and she was to end the race first, but she unexpectedly fell down. SARVAM coordinators immediately responded to the situation but even before they could reach her with a first-aid box, she got up and started to run in order to complete the race. She would have got First Prize, had she not fallen, but ended up crossing the line second. After the race got over, coordinators in charge of medical emergencies reached out to her urgently to assess her injuries and found out she was wounded badly. They realized that she did not give up when she fell but started running again even paying no attention to the wounds which she received. It showed how much enthusiasm she had in achieving the goal.

One of the participants who completed the 5000 m race is 85 years of age.

The complete album of the event is available here.