Awareness Programme and Construction of Toilets at SARVAM 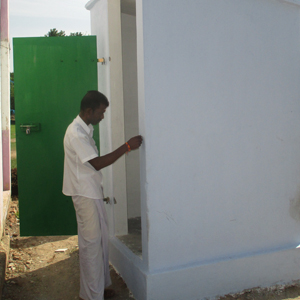 In the last decade, Sri Aurobindo Rural & Village Action & Movement (SARVAM) through its ‘Cleanliness and Hygiene’ programmes has focused significantly on generating awareness on the importance of sanitation facilities for every family, including the absolute essentiality of toilets, solid and liquid waste disposal systems, cleanliness of surroundings, consumption of clean drinking water and fresh food, and how all of these affect individual and community health.

The main objectives of this programme include: 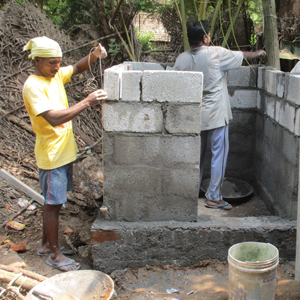 • To reduce open defecation. Open defecation is one of the main causes of many illnesses (and sometimes even deaths) each year.
• Construction of individual and community toilets. • For cleaner and greener surroundings, the mission aims at changing people’s attitudes, mindset and behaviours.
• To keep villages clean, involving local administrative bodies to set up mechanisms for proper treatment and management of disposal of solid and liquid waste.
•  To make separate toilets for girls and boys in all schools.

In 2017, SARVAM along with the local administration took up the task of constructing 125 cost-effective model toilets for individual households. Work on 60 toilets is either complete or underway. However convincing people to get individual toilets is an uphill task as they are used to open defecation and do not see any problem with a practice that has always been followed.

To further educate and create awareness, another motivational programme was organized for 55 women on March 7, 2018. The facilitators of the programme created an interactive platform to address all the concerns of the household which were reluctant to construct toilets in their homes. They were explained with simple, local examples how cleanliness and having toilets lead to

1. Improvement in quality of life for all the people within the family and surroundings due to cleaner, greener surroundings
2. The contamination of food, drinking water and air due to open defecation can be eliminated if toilets are created.
3. The soil gets polluted and groundwater that is used for drinking and irrigation of plants gets contaminated due to lack of proper solid waste management, which leads to generations of diseases and illnesses.
4. Waste management will increase the fertility of the lands, leading to better, healthier crops and thus enhanced economic prosperity.
5. Cleanliness would lead to beautification and greenery of their lands which will be a matter of pride and happiness compared to the surrounding areas.

The next round of construction of toilets started in March 2018 and the women coordinators of SARVAM have adopted the role of supervisors to ensure superior quality in construction not just for toilets being built by SARVAM but also other agencies working in the neighbourhood.

There is a slow, but sure change being seen in the SARVAM villages.