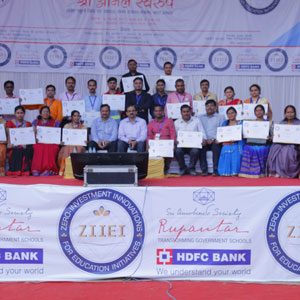 Zero Investment Innovations for Education Initiatives (ZIIEI) is a mass-scale teacher outreach project, launched in 2015 as part of our nation-wide programme Rupantar to transform education in government schools. After reaching out to nearly 1 million teachers during 2015–17, the project has been launched in 10 states in 2017–18. A film has also been released to convey its essence.

In two years, ZIIEI has oriented nearly one million teachers to the concept of zero-investment innovation and how their efforts at individual level can bring about significant improvement in education quality. The programme identifies the most effective best practices at the grass roots, and scales them up to thousands of government schools every year. In 2016, innovations by 30 teachers were published by ZIIEI in Navachar Pustika (Book of Innovations), and by Dec 31, 2017, more than 150,000 schools had submitted requests to use their work in their classrooms.

“For the first time in my career I was asked what I felt and thought about the quality of education and how it can be solved,” says Ayushi Sharma, a teacher at Rajkiye Balika Inter College (Hastinapur), whose idea of using art and craft for children’s holistic development has reached nearly 11,000 schools through ZIIEI.

Seeing the results, ZIIEI has received much appreciation from the Ministry of Human Resource Development, and during 2017–18, the project became operational in a total of 10 states, reaching out to 2.2 million teachers. HDFC Bank is supporting is project’s implementation nation-wide.

Watch the short film ‘ZIIEI – For the Teachers, By the Teachers’ showcasing ZIIEI’s work and impact.

A series of exhibitions have now been launched in Uttar Pradesh to give teachers an opportunity to connect with the local education fraternity. This idea-exchange platform is also a chance to gain appreciation and recognition for the teachers who think out of the box and are making an effort to bring a positive change in their classrooms. As of December 31, 2017, four exhibitions have been held in Barabanki, Farrukhabad, and Allahabad districts and Agra division, with more than 100 teachers presenting ideas at each event, attended by 700–1,000 local education officers, teachers and principals as visitors.

“I congratulate teachers who have come up with these innovations, because they did it out of their own initiative, without any government order,” Prakash Javadekar, Hon’ble Minister of Human Resource Development (MHRD) said in a video message for a ZIIEI exhibition held in Barabanki in 2017.

Because of the programme ZIIEI’s immense popularity, there was a need to make the programme available to teachers across the country ‘On a Click’. Therefore, ZIIEI bilingual website was developed and in August 2017 it went live.

As most of the schools covered in the 12 states where ZIIEI has made in-roads fall in the Hindi belt, the website for now is in Hindi and English, and constantly being upgraded to be presented in other Indian languages. The idea is that a teacher sitting in the remotest corner might be a pool of ideas and might be implementing unique efforts in his school but recognizing those efforts and bringing them on to a bigger stage is what ZIIEI programme intends to do, through this website.