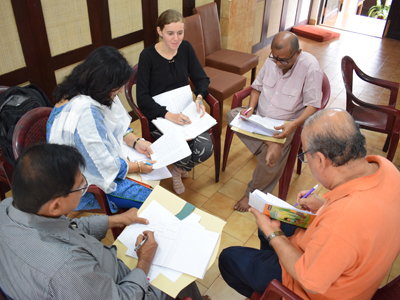 The Sri Aurobindo Foundation for Indian Culture (SAFIC) organized a four-day workshop on ‘Dhaturahasya: Unfolding the Secret of Root-Sounds in Sanskrit’. Some of the objectives of this workshop were to be able to understand the principle behind the eternal relationship between sound and sense, the true nature and function of a root-sound and the process of formation of words from a root-sound.

The workshop began with an introduction by the facilitator, Dr. Sampadananda Mishra, on the ‘Concept of Root-Sounds in Sanskrit’—how every language has its own svabhava and svadharma, while also highlighting the importance of Sanskrit as a mantric language. In the session on the ‘Origin of Language’, the ancient science behind the production of speech was discussed; how every sound in the Indian tradition is believed to have two aspects—the subtler essential sound called the sphota and the audible sound which expresses the sphota called the dhvani. 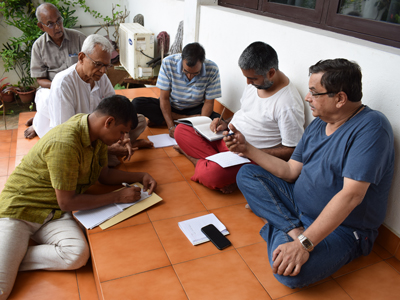 Two sessions were dedicated to the ‘System of Seed Sounds’. There was a detailed discussion on many of the letters of the Sanskrit alphabet which are considered ‘seed sounds’ and given much importance in Tantric literature. The three sessions on the ‘Mechanism of Derivation of Root-Sounds in Sanskrit’ delved into the technical aspects of noun and verbal bases wherefrom the words of the Sanskrit language arise. Some other semi-technical sessions included the principles behind conjugating verbal roots as well as the prefixes which modify the senses of the verbal roots.

In the sessions on the uniqueness of Sanskrit words, Dr. Mishra talked in great details about selected Sanskrit words that he had researched on in the past and whose meanings were revealed through a period of exploration. Words such as shraddha, tapas, namas, adhyayan, sankalpa and so on were probed in a deeper sense so as to truly understand what they mean and to show how the translation of these words into the English language can hardly do justice to their deeper psychological meaning. In the session, dedicated to ‘Root Sounds as a Guide to the Scriptures’, the first verse of the Rig Veda was taken up for study, whereby the root sense of the words were brought out in the light of Sri Aurobindo. 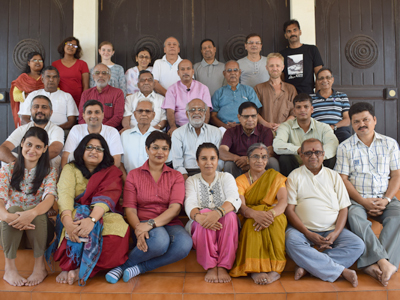 There were two separate activity sessions for the participants—one in which they had to, through group discussion, discover the root sounds of a certain number of words of their choice, and the other in which they were asked to create new words by using verbal roots. Both these activity sessions gave immense encouragement to the participants to think in terms of the essence of the language.

In the last session, one of the participants, S. Sambasivan, made a short presentation on how he could, through his research, connect some of the Sanskrit words with words used in the English language. The workshop ended with many of the participants giving a feedback of their experience of the four days that went by.

“I really like the way in which Sampadanandji delivers his content, very iteratively and incrementally.”—Dhaval Dalal, Mumbai

“I found ultimate clarity and stimulation intellectually as well as spiritually opening many ways of perceiving and learning. I feel as if I have uncovered (as a part of the whole) my individual roots through the illuminating power of sound.”—Louise Nairn, Australia

“The emphasis on the deeper aspects of Sanskrit language and the practical, psychological dimension to getting in touch with the spirit of the language were much appreciated. The session on uniqueness of Sanskrit words was excellent!”—Dr. Beloo Mehra, Puducherry

“It is the dedicated research and ability of teaching out to the level of understanding of each participant of Dr. Mishra that makes learning of Sanskrit a joyful activity as well as refreshing experience.”—Dr. Geetesh Nirban, Delhi