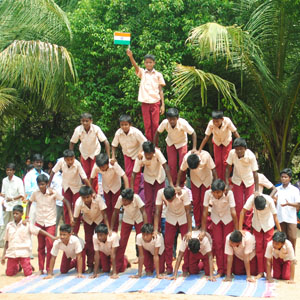 SARVAM 9th year Summer Camp in the villages once again set new milestones. Starting from April 15 to May 30, 2017, the presenters, organizers, volunteers and parents provided a fun and engaging experience for over 1,200 children, many of whom were attending the camp from the new villages.

The two sessions, spanning over six weeks and 8 different village locations, brought heightened complexities. In addition to the logistical challenge of organizing the camp programme involving 35 professional trainers, 25 SARVAM coordinators and over 50 volunteer teachers from the villages and cities, over 1,200 children needed to be fed lunch and snacks! Another 100 women helped cook over 120—150 kilos of rice daily (in three 50-kilo capacity pots!) on earthen stoves. Starting at 5 am in the morning, by 10 am the meals were ready to be distributed to the 8 locations. As always the success of the camp depended on the full engagement of the community.

In a departure from the last eight years, separate sessions were organized in order to accommodate the unprecedented number of students. Students of 16 years old and above attended the camp from mid-April to early May, while the younger children participated during the last three weeks of May. Also, unlike past years, there was a much greater emphasis on sports—every afternoon was devoted to athletics including games, races, martial arts and other physically challenging activities. And this year’s sports included the older girls who usually didn’t have this opportunity. Despite the complications of managing large numbers of participants (made worse by the exceptionally hot weather), the children clearly enjoyed their days, with many children continuing to play even after the camp closure time of 5 pm.

The sessions in the mornings were devoted to the soft skills of character building, English language studies, arts, crafts, soap and chalk sculpting, science exploration, technology and computer skills. These sessions, skilfully led by trainers from Coimbatore, Tindivanam, Villupuram and Pondicherry, kept the students engaged with fun learning activities. And, for the first time, all the classes for the older students were conducted exclusively in English—a testament to the success of the English Access Program SARVAM has helped run for the last two years.

Knowing that the older students are going through the difficult stage of adolescence, this year’s motivational sessions were led by professional psychologists. After slowly building trust, the children felt comfortable talking about adolescent issues of health, changing bodies, developing emotional attachments, attraction to the opposite gender, uncertainty about future and most such questions on their minds. While most children shared openly, the presenters engaged in some private conversations with individuals and will continue to follow-up monthly on a one-on-one basis as needed in the upcoming months.

As usual, there were plans for a large performance later at the end of the camp for all the children to showcase the newly acquired skills and creative abilities for parents and guests, for which a lot of hard work and practice sessions were organized in the afternoons. Therefore, to mark the end of the six-week camp, a simple closing ceremony was organized with treats and prizes for the participants. The guests were treated to a grand surprise as the students from all the eight camp locations marched in formation behind flags representing their villages. The simple closing session ended up being transformed into an all-day presentation of dances, martial arts, speeches, skits, yoga, sports, music, arts and crafts by the children. Extending until 7 in the evening, group after group came up to present what they worked on during the camp, all expressing their gratitude to the SARVAM organizers.

The success of programmes such as these is measured by the responses of the children—and the enthusiasm and joy they felt was clearly on display during this closing celebration, just as it was every day of the camp. Many of the very experienced trainers remarked that they had never seen this level of discipline and engagement among rural children. Unexpected in most Indian villages, the trainers here heard students reflect that they want to become aeronautical engineers, scientists, air hostess, etc. And with the motivation and support they receive through programmes such as the SARVAM Summer Camp, many of them will actually be able to realize their dreams.